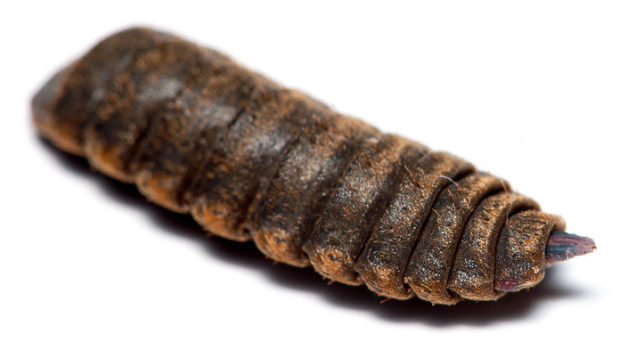 The economic value of Black Soldier Fly (BSF) (Hermetia illucens (Linnaeus)) has been recognised since the 1970s, when researchers first suggested that their habit of using (and consuming) animal faeces for larval development can be used simultaneously to manage manure and generate a protein source – BSF larvae as livestock food. Now a million-dollar industry, BSF are becoming a household name, but perhaps new opportunities still lie in unexplored aspects of their biology or ecology.

In 1959, researchers in Georgia noticed that the addition of certain insecticides to privies, the production of houseflies (HF) – Musca domestica – from the privy actually increased. Several studies later, this paradox appeared resolved: in insecticide-treated privies, the BSF population was reduced, and in some way, this facilitated an increase in HF. It was suggested that the presence of BSF in untreated privies kept the excreta in a semi-liquid state – unfavourable to HF breeding – while the semisolid excreta of treated privies became ideal HF breeding territory. Further studies revealed that in the lab, development of HF was decreased as the number of BSF larvae was increased – but this was thought to be mediated by the amount of larval media present. A field study where BSF larvae were artificially introduced to poultry manure revealed that HF breeding was prevented, relative to control areas.

Two more studies in the mid 1980’s added to the evidence base: one in which techniques of poultry manure management favoured the development of BSF larvae, which then reduced HF and lesser housefly populations, and another that suggested the oviposition behaviour of HF was affected by the presence of BSF larvae in manure. Housefly oviposition was inhibited, or reduced at higher BSF densities. The authors suggested some chemical communication was preventing HF oviposition behaviour.

These older papers suggest that BSF may provide a means by which to control HF, and perhaps even other filth flies. Transmission of disease by filth flies is a forgotten problem in higher income countries, where sanitation and environmental improvement prevents the accumulation of breeding material and in doing so controls fly populations. In low to middle income countries however, filth flies continue to contribute to the transmission of many diseases, notably diarrhoea and the eye disease trachoma.

Recently, Miranda and colleagues decided to revisit possible competitive interactions between BSF and HF, and conducted a series of studies to investigate whether colonization sequence – i.e. who arrived and colonised the faeces first – had an impact on the competitive outcome. This is known as the ‘priority effect’. Priority effects were tested by introducing batches of 100 laboratory-reared insects (at first instar larval stage, so very newly hatched) to known amounts of homogenised poultry manure, then measuring the resultant fly pupae, to assess competitive outcome. As well as counting how long the larvae of each species took to pupate, and how many were successful in doing so, pupal weight was assessed. In the fly world, larger is more ‘fit’, so heavier pupae are fitter individuals.

Across nine treatments, BSF and HF larvae were introduced at the same time (T1, or BSF0HF0), then each species was introduced as a competitor to a medium already containing the opposing species, the ‘pioneer’ (Figure 3). Introductions were done at day 2, 4, 6 and 8, and the cultures were examined daily for puparium (HF) or pre-pupae (BSF) (these are equivalent, but lifecycle-specific, endpoints). Experiments were controlled by introducing the same number of larvae to manure of the same age and monitoring development in the same way – this was particularly important, as, perhaps unsurprisingly, the age of the faeces media was found to impact larval development.

Overall, therefore, while the development of HF was affected by the presence of BSF in some instances, most HF larvae (>70 %) successfully developed through to pupariation in all treatments other than BSF0HF8 (BSF = pioneer, HF introduced 8 days later).

BSF larvae alone (controls) were very affected by the manure age, with no development to pre-pupae in manure of >4 days. At 2- and 4-day old manure, BSF took longer to develop, percentage reaching pre-puparation declined, and pre-pupal weight declined with increasing manure age. BSF were significantly affected by the presence of HF across all mixed cultures. When HF were the pioneers, no BSF pre-pupae were found, indicating that the presence of the HF or their impact on the manure medium affected the ability of BSF larvae to develop. When BSF were the pioneers, the addition of HF at day 2 completely prevented BSF pre-pupae from developing. Other than this stark effect, the days to pre-pupal stage were – surprisingly – decreased by the addition of HF at days 6 and 8, and the percentage reaching pre-pupation was higher in these two treatments. BSF pre-pupal weight was negatively affected by addition of HF larvae at day four only.

Given the not-insignificant number of older studies suggesting the BSF outcompete or inhibit HF breeding, the results presented here are surprising – and disappointing. As previous studies did not take the priority effect into consideration, the authors suggested that colonization sequence plays a critical role in competitive outcome, but the paper would have benefitted from a more in-depth discussion of how this and previous findings all fit together. Certainly, however, the results are intriguing and the wider topic worthy of further investigation.