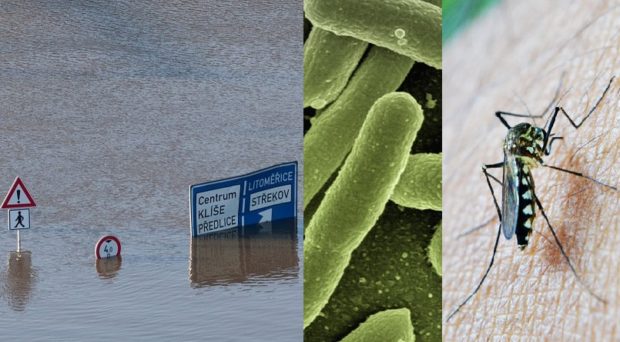 Ancient wisdom and current knowledge
Long before they were aware of the organisms that were responsible for diseases such as malaria, our ancestors knew that certain climate conditions could increase the potential for illness. For instance, Roman aristocrats moved to higher grounds in the summer to avoid falling ill with malaria.

From studying past and current outbreaks, scientists have known for some time that long term climatic changes can result in the spread, emergence or re-emergence of infectious diseases. Equally importantly, judging by recent newspaper headlines such as: “A Mysterious Infection, Spanning the Globe in a Climate of Secrecy” (NY Times, USA) or “Tropical disease outbreaks are growing threat in Europe as temperatures rise” (The Guardian, UK), the media and general public are also becoming aware of the connection… and the future problems this ‘relationship’ can pose for us.

Why is it that climatic changes can influence infectious agents so much?
In terms of fungi, mammals generally are not as vulnerable to them as plants are because of the protection inferred by the thermal restriction zone – the difference between our basal body temperature and the outside world – which acts as a barrier that most fungi cannot cross. This is why, when we do get fungal infections, they are normally in our extremities (e.g. feet, hands) where the conditions are cooler.

However, this is changing because of global warming. In their paper in mBio, Arturo Casadevall and colleagues, explain how warmer global conditions have reduced the temperature gradient between the environment and our body temperatures, making the ‘jump’ from one to the other easier for fungi  – and this is mainly why the yeast Candida auris has emerged as a global human pathogen and is being touted as the first to emerge as a result of climate change (it is also highly anti-fungicide resistant making matters even more complicated).

What of other pathogens? Well, the spread of many bacterial and viral diseases is influenced by where their vectors (carriers, who do not themselves suffer from the infectious diseases) are to be found. Extreme weather events and warmer temperatures mean that water-borne and insect-borne pathogens have migrated further than where they were normally found. In the aftermath of hurricane Florence in North and South Carolina back in 2018 there were huge swarms of mosquitoes in the states – flooded streets became a haven for them. The mosquitoes that carry the Zika virus spread to wider geographic regions fueled by warmer temperatures, as Madeline Thomson, University of Columbia, explained in her interview with On Health.

It is not just humans that are affected by climate change-influenced infectious diseases; animals and plants are feeling the effects too. Only last week, the New York Post reported on lethal bronzing, a disease that is killing palm trees across the state of Florida. The bacterial disease is carried by the ‘treehopper’ insect, which originated in Mexico, but was transported by hurricanes to the Caribbean and Florida.

The return of malaria?
Malaria has plagued humans for most of our history, causing so much death and pain. It is no surprise then that considerable time and resources have been spent in a bid to eliminate the disease around the world. The WHO have a long list of countries that are malaria free and are adding to it each year. However, malaria is also one of the most sensitive to influences in climatic changes – for example increases in malaria incidences occur after long or unexpected rainfall. Under extreme and long term climatic changes, malaria could re-emerge in many regions across the world, undoing elimination efforts. India Today reported on the flooding in India, Nepal and Bangladesh in July 2019, which officials are blaming on extreme climate conditions. The incidence of malaria and diarrheal diseases are expected to spike following the flooding.

So, what is next?
We know that there will be more outbreaks of current diseases, new emerging disease threats and the re-emergence of those threats we thought we had eliminated  – this seems to be an inescapable future. What we do not know is what, when or where these will be.

As I mentioned in my blog last year on predicting the next outbreak, there are so many risk factors contributing to the potential for outbreaks. Add to this the rising political instability across the world, and it seems a concerted global effort may be difficult to coordinate.

However, what we can do is monitor and provide as much information to help support efforts to contain future disease outbreaks. A collaborative cross-journal collection ‘The Contribution of climate change to the spread of infectious diseases’ was launched this month across BMC journals. All articles are open access, and submissions are open to anyone with relevant content.

I am not a pessimist by nature, so I hope we can work together to prepare for the spread of climate change-induced infectious diseases.