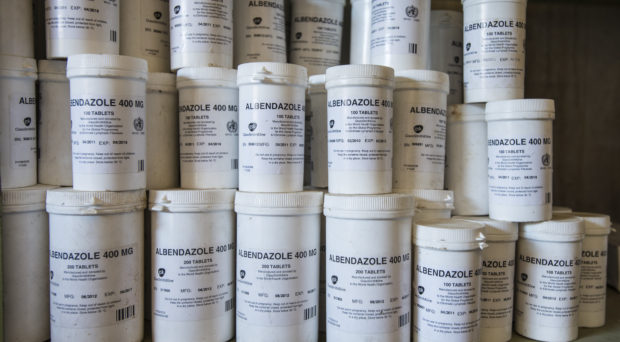 Narayanpur Health Post, Dang Valley: medications stored in the health facility. Supplies of Albendazole, for distribution in the LF program.

Most MDA programmes use lay volunteers in endemic communities to implement treatment. MDA doesn’t require diagnosis and the drugs used to treat schistosomiasis, soil transmitted helminthiases (STHs) and lymphatic filariasis are safe. The community medicine distributors (CMD) are usually elected by local leaders and the people donate their time and efforts to this essential health intervention. The CMDs usually receive training (and a small travel reimbursement) from their local Ministry of Health, but otherwise are unpaid. These CMDs are critical to the success of MDA. Therefore, understanding what factors influence the number of treatments individual CMDs are able to distribute is important for improving village coverage, but data at this fine scale is very difficult to collect and interpret.

A recent study published in BMC Medicine profiled individual CMDs and the factors that influenced the number of treatments they administered. In a Herculean effort, the scientists tracked treatment by CMDs in 31 villages over a month during a routine MDA. In Uganda, two CMDs per village are tasked with treating all eligible individuals (classified as community members that are five years or older in this setting). CMDs are trained to move door-to-door with the treatment rather than administer at a central point.

The villages surveyed were all in Mayuge District in Eastern Uganda, a known high endemicity area for several neglected tropical diseases. All villages were within 5km of Lake Victoria and all were eligible for community-based MDA. The villages had received at least 10 annual rounds of community based MDA at the time of the study. The prevalence of three neglected tropical diseases in community members over the age of 5 years ranged from low for lymphatic filariasis (5%) to high (schistosomiasis (36%) and hookworm (41%)).

To evaluate the treatment rates of CMDs, 40 households from each village were randomly sampled to survey the treatment coverage. In the end, 1238 households with 6776 individuals were surveyed for this study.  Individuals within households were asked if they were offered a drug, which CMD offered them the drug and whether they ingested the drug. Data was also collected on each CMD, including but not limited to metrics of altruism, socioeconomic metrics, and social network cohesiveness.

Over all the individuals surveyed, only 45% of people eligible were treated during MDA. Praziquantel (for schistosomiasis) was offered more than albendazole and ivermectin (hookworm and lymphatic filariasis). Each CMD treats about 26% of eligible individuals within a village, which is below current recommendations for coverage.

CMDs in this district were on average older compared to the median age of the population. Many of the CMDs had been in their role for over 8 years, indicating very low turnover of this volunteer position. Many of the CMDs were farmers (75%), despite a lot of fisherfolk in these populations. CMDs were often selected by local council members, rather than nominated by the community (which is the national recommendation).

Among the CMDs, there was a lot of variation in treatment rates. So what predicts a high-performing CMD? Out of 25 characteristics of the CMDs that were collected, only 7 of these were shown to correlate with their effectiveness. When CMDs get friends to help with MDA, this increases the number of eligible individuals they treat. Also fisherfolk/fishmonger occupations increased the treatment in the community. Female CMDs were found to treat less of the eligible community members than men. Additionally, several social network metrics were important in increasing treatment. Interestingly, if a CMD was appointed by a local council, they treated less people than if they were elected during a community meeting.

This study highlights that improving CMD treatment rates will be essential for improving coverage. This study, in addition to others, found little barriers within the recipient community and found that CMD characteristics are important in treatment rates. More work like this study, particularly in different settings, will help profile what makes CMD effective.

Focusing on ways to improve individual CMD treatment rates will have cascading impacts on local morbidity and transmission and should be a focus of evaluation and monitoring studies.