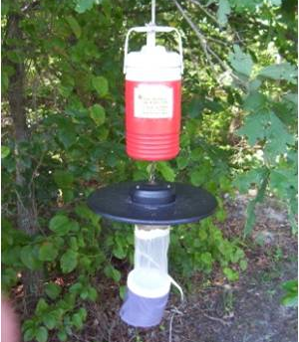 Mosquitoes are the most dangerous animals on the planet, thanks to the variety of arboviruses and other pathogens they transmit. Surveillance of these pathogens in collected mosquitoes allows us to detect them before they infect people and become public health concerns. Unfortunately, mosquito surveillance is a tedious and expensive enterprise, and local mosquito control districts and researchers spend a lot of time, money and effort doing that.

I know this at a personal level, as a mosquito surveillance partner of the Washington Department of Health in Spokane County. For the last 4 years, once a week in the summer, I was collecting mosquitoes for them at Turnbull National Wildlife Refuge and in Spokane. I would spend several hours in two subsequent days, setting and retrieving CDC light and gravid traps, and sending the mosquitoes to Olympia for testing in coolers with ice packs. There, a highly trained entomologist would sort my mosquitoes into species, along with all the other mosquitoes from across the State, and a molecular biologist would test them for West Nile virus infection. In addition to my time, the entire process costs significant amount of money for the state, in terms of salaries as well as laboratory and shipping costs.

The above procedure for mosquito surveillance has been developed during the 20th century, and hasn’t changed much since. It uses relatively low-tech solutions, such as battery-driven fans and dry ice as attractants, and coolers with ice packs. There have been indications for the emergence of new technologies (such as traps deployed by drones and smart mosquito traps), but the uptake of new advances have been slow at best. For the most part, we conduct mosquito surveillance now just like we did 40 years ago. However, that might soon change!

One of the recent advances in mosquito surveillance has been the use of environmental DNA associated with mosquitoes. First, this took the form of mosquito saliva, where mosquitoes would feed on either sugar-baited solutions or sugar-soaked material, and would leave traces of virus in these media. While the idea has been successfully field tested multiple times, it has not been rolled out in operational usage, potentially due to concerns related to the amount of mosquito saliva (~ 4.7 nl), and the sensitivity of these tests relative to standard mosquito surveillance. In addition, arboviruses only become detectable in mosquito saliva after the end of the extrinsic incubation period, when mosquitoes become infectious themselves, adding a significant delay in terms of detection relative to current methods.

While using mosquito saliva was a good idea, Scott Ritchie and members of his lab have been able to come up with an even more brilliant solution. Showing how useful it is to read very old papers, they happened upon a series of papers from the 1920s that demonstrated that mosquito excreta could be used to infect rhesus monkeys with yellow fever, containing infectious viral particles. More recently, the same has been shown for dengue virus. First, they conducted laboratory experiments, testing whether or not they could detect Ross River virus and West Nile virus (Kunjin strain) from both the saliva and excreta of infectious mosquitoes. They did find viral RNA in these excreta between 2 and 15 days after feeding, at higher rates than in mosquito saliva samples. Importantly, very low levels of infectious viral particles were found in cell culture studies, indicating a relatively low risk of handling. 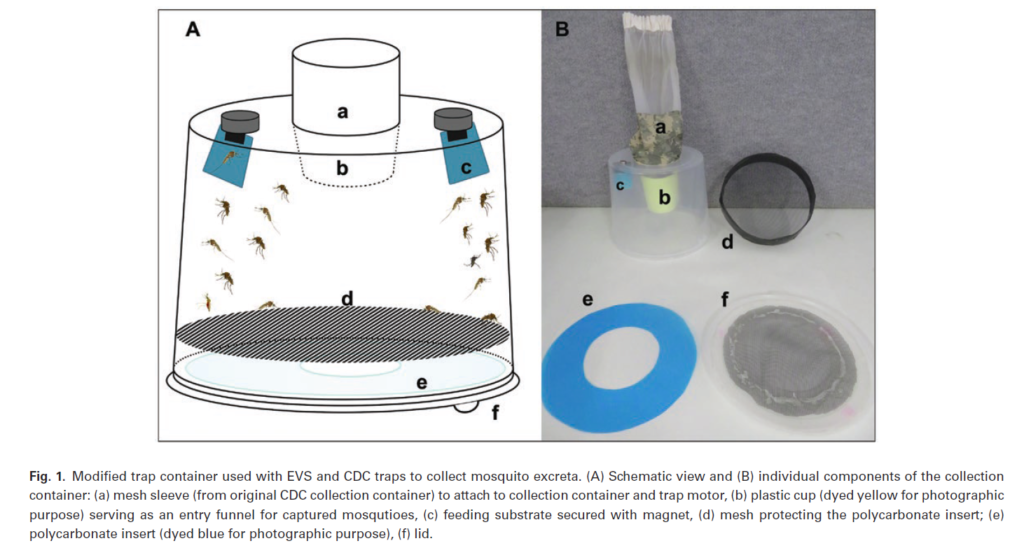 While this laboratory result was promising, the real question is whether or not these methods would work in the field – and that is exactly what they proceeded to test. The authors modified both EVS and CDC light traps and Passive Box Traps to contain both a set of honey-soaked materials for the mosquitoes to feed on, and FTA cards to collect mosquito excreta. These cards contain a mixture of chemicals that lyse cells and stabilize nucleic acid for long term storage at room temperature. The authors then tested these cards to see if they could extract and detect viral RNA from mosquito saliva and excreta. They were able to detect both Ross River and West Nile virus from both the saliva and excreta of mosquitoes, as well as Murray Valley Encephalitis virus from mosquito excreta, therefore demonstrating that mosquito excreta can be used in field settings for arbovirus surveillance.

How could this change mosquito surveillance? Well, perhaps, if I implemented this method, I wouldn’t need to send my mosquitoes for identification and sorting. I could just take out the FTA cards with the mosquito excreta and saliva, and send or analyze those myself. It would save money on identification and shipping, but I would still need to set and collect my traps twice a week. This is where the Passive Box Trap (also Scott Ritchie’s invention) comes in. These mosquito traps do not require batteries, and can be left in the field for several weeks instead of just overnight. They attract mosquitoes by releasing CO2 at a low rate, either from dry ice or from a CO2 cylinder. Mosquitoes are kept alive inside by feeding on the honey-soaked material and by keeping moisture levels high through wicking from an external water source. This trap has been further developed into the sentinel mosquito arbovirus capture kit. Theoretically, such a trap would only need to be serviced once a week, when the FTA cards would be replaced and sent for testing, and the feeding station and the CO2 tanks replaced regularly. This would cut down on the logistical difficulties of collecting mosquitoes, and potentially allow for more traps to be deployed to provide better coverage across an area.

Many of the new technological advances in mosquito surveillance come with a potentially high price tag which does not agree with the financial limitations of mosquito control. The beauty of the above methodology is its’ simplicity and low price tag. The modifications could be easily done in house with low to no cost. The biggest cost might be the FTA cards themselves and the cost of testing, which is not higher than with the current methods. Therefore, I decided to test the above methodology by sticking honey-soaked sponges and FTA cards into my existing traps, to see if (a) they collect mosquito excreta and (b) if they collect viral DNA. We’ll see how it works! If it does, it could change how I conduct mosquito surveillance altogether!

Let me know in the comments what you all think! Is this going to be the future of arbovirus surveillance? If not, why not? Looking forward to your comments!