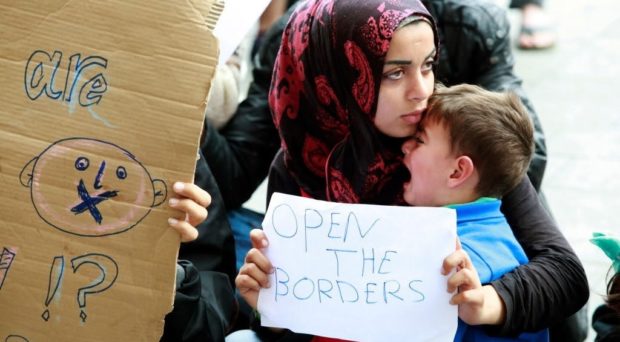 On Tuesday, December 11, 2018, President Trump has openly argued with the Democratic leaders of the U.S. Senate and House of Representatives, Chuck Schummer and Nancy Pelosi, about the upcoming federal funding appropriations, demanding that it includes $5 billion funding for a physical wall along the Mexican border, vowing the shut down the federal government if the Democrats do no concede to his demands. This border wall is an embodiment of the anti-immigrant, nationalistic rhetoric that made a comeback in the United States with the 2016 campaign and election of President Trump. Similar sentiments have flared in the last decade or so in many other parts of the world, from Brazil to the UK to Australia.

Unfortunately, there are many myths, misconceptions and prejudices concerning migrants propagated by politicians, some of it having to do with the economic and health risks and costs posed by accepting migrants. Amid all these rhetoric, a group of researchers (sociologists, public health, law and policy experts, and anthropologists) at the University College London, led by Ibrahim Abubakar, established a Commission on Migration and Health in order to provide a solid evidence base for these controversial questions, and make recommendations for the future to protect the health of migrant populations. They worked for two years to produce a 42-page report with many additional comments and materials on the topic, as well as a meta-analysis on the global mortality of international migrants in high-income countries, and other topics. I only briefly scratched the surface of their undertaking, but feel like I already learned a lot, which I will share below.

So what did they find in terms of these misconceptions? Basically, they found all of them to be unfunded. Let’s see them one by one:

While the systematic review and the meta-analysis did find that international migrants in high-income countries have reduced mortality, there are many adverse health effects of migration. The act of migration is itself dangerous as well as costly, especially for undocumented and illegal migrants from areas of conflict and violence. Migration also changes the risk profile of the migrants, where they either conform to the resident population, or to other migrants in terms of habits, diet and lifestyle that can lead to worse health outcomes for migrants. For example, migrant populations in Europe had an increased risk of perinatal mortality, preterm birth, low birthweight and congenital malformations. Another one of these issues is mental health. Persistent unpredictability and uncontrollability of their future, combined with fear of deportation, discrimination and targeted condemnation can lead to profound mental health consequences, as well as a lack of access to healthcare and other services. This can have economic consequences at the societal level, such as in Australia that lost 3% of GDP over 2001-2011 as a result of individuals experiencing some form of racial discrimination.

The authors emphasize that migrants, just as all other human beings, are equally entitled to universal human rights without discrimination, including to the right to the highest attainable standard of health, equal access to preventative, curative and palliative health care, in addition to the underlying social, political, economic and cultural determinants of physical and mental health, such as clean water and air and non-discriminatory treatment. These rights and obligations are obviously not being met sufficiently for migrants currently. The authors have concrete suggestions to improve leadership and accountability, such as the UN appointing a Special Envoy on Migration and Health, and for national governments to have a country-level focal point, enabling much needed coordination and inclusion. They also propose to establish a Global Migration and Health Observatory to develop evidence-based migration and health indicators to ensure better reporting, transparency and accountability on the implementation of the Global Compact for Migration and the Global Compact on Refugees. They also suggest that health representatives should be involved in high level policy making on migration. Racism and prejudice should be confronted with a zero-tolerance approach, just as Dr. Peter Hotez demonstrated so clearly. Finally, universal and equitable access to health services and all determinants needs to be provided to migrant populations.

I found the Commission on Migration and Health to be very useful, even though I could only scrape the surface of this vast topic in this blog post. The authors also provided videos and interactive materials to communicate the main messages, especially about dispelling the myths numbered above. I do hope that their recommendations will be headed and the evidence they collected will be widely distributed and help dispel these misconceptions and prejudices. A citizenship aware of these facts on migration are harder to be misled by the ‘fake news’ and the propaganda aimed to exploit their feelings for political gain.

Much of your study on these topics were done in the UK and if done in the U.S. it certainly was not done correctly or there was some information &/or selection bias! Healthcare and higher education are free in the UK, so the “cost of healthcare on migrants” doesn’t apply!
Yes, many illegal immigrants do take American citizens jobs, they receive free healthcare and free higher education, something American citizens pay for and will pay thousands for just one in a single year! Most citizens come out of college with student loans exceeding $25,000-$50,000+ in student loans, something that may take up to 20 years to pay off, however, American citizens usually are employed in the U.S. putting money back into the U.S. economy! Most immigrants come out of college without any student loans and some will move back to their home country and it will go back to their home country’s economy!
The U.S. does not have the same immigration issues such as refugees like the UK, the U.S. has a problem with illegal immigrants, greater than that of any other country in the world!!
Much of your study doesn’t pertain to the U.S. at all, and I’m sure you didn’t ask any American citizens how we feel, it’s not that we’re trying to discriminate against anyone, however, there is a feeling of resentment, and understandably when because illegal immigrants are getting everything for free and the American citizens pay for them with higher taxes, rising healthcare costs, and higher costs in education!
We want immigrants to come here THE LEGAL WAY, apply and pay for citizenship and working papers!
We feel the U.S. has serious domestic and financial issues that need to be addressed within prior to taking more immigrants that will cost this country more financially only adding to the deficit!
We just had large corporations that employed a large workforce shut down in the U.S. and from what they’re predicting we have a major recession coming and need to make preparations for it prior to accepting more immigrants that would be taking citizens jobs or in the very least there should be a cap of immigrants until some issues are dealt with!
Please, as a citizen let me educate you on what we are exposed to on a daily basis! Notice I’m using the word “Citizen” not “white person”, or “legal immigrant”, the U.S. is a melting pot made up of practically every nationality in the world, black, white, yellow, purple, etc. and Americans are proud of that!
1) President Trump did NOT spread anti-immigration rhetoric, he is listening and responding to what American citizens are asking of him regarding the serious illegal immigrant problem and securing our borders! We are exposed to the serious issues this country has every day, & I would hope that research studies and journalists claiming to speak for the citizens would at least start asking the citizens!
2) We’re dog-tired of: A. “Illegal Immigrants” breaking into our country living under the radar and after a period expecting we accept them as U.S. citizens, if they started here illegally they should go through every process legal immigrants go through, B. Female illegal immigrants or married illegal immigrants birthing a child immediately after arriving in the U.S. as a way to being accepted as U.S. citizens, if they started here illegally they should go through every process legal immigrants go through, C. Illegal immigrants demanding and/or expecting “free” money, housing, food, education, top-notch healthcare, and other public assistance when our own hard-working citizens are unable to obtain this! If they refuse to work &/or break the law then they should be sent home!!
3) We have homeless Veterans living on the streets in poverty that aren’t getting the assistance owed to them, these are men & women who fought for our country & democracy that are dying of starvation, exposure to the elements from lack of housing, & disease that can be cured easily if given proper healthcare! We also have other citizens living below the poverty line with the same issues as our Veterans! We need to take care of our own prior to taking care of more immigrants!
3) We have African-American citizens that were born and raised here for generations that are experiencing serious discrimination some met with violence, and others experiencing some form of discrimination such as employment and aren’t treated nearly as well as immigrants! Women as a whole are discriminated against as well as experiencing sexual harassment on the job, etc.
These are just the top 3 I thought of, although there are many!! We’re NOT talking about refugees who need a home due to their own ravaged by war, political &/or religious persecution, or ethnic cleansing/genocide and have absolutely nothing, I’d be the first to open borders and give people what they need! Americans are VERY compassionate people! Many who come here are not dealing with issues of a war-torn country, they want the “All American Dream”, however, this really doesn’t exist today as it once did, we NEED to take care of our own citizens, and the country’s we’re speaking of need to care for theirs, otherwise we’ll be breaking into those countries!!
PLEASE PUT THIS IN YOUR BLOG: In the next few years there will be nothing left of the U.S. because the rest of the world has used it all up and there won’t be anything left to give!! 🙁

Editor at BugBitten
Krisztian is the Assistant Professor of Biostatistics at the Department of Biology at Eastern Washington University. He is a disease ecologist, interested in the complex relationships between hosts, vectors, pathogens, and their biotic and abiotic environment. You can also follow his writing on http://kmagori.weebly.com.