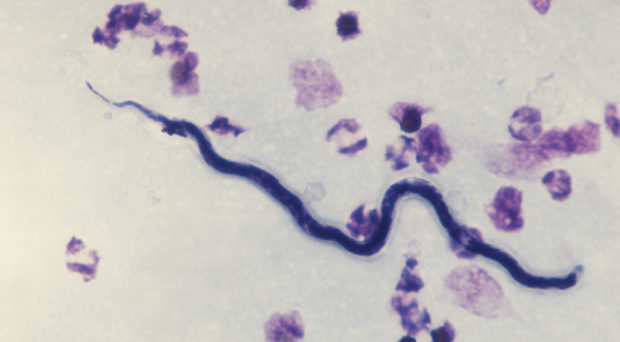 Many diseases talked about in this blog rely on mass drug administration (MDA) to reduce transmission and morbidity in endemic communities. This is a public health policy that involves mapping where diseases are found and administering treatment to at-risk groups without testing for the specific disease (can be entire communities or particular groups, i.e. school-aged children). MDA is used to combat five neglected tropical diseases: onchocerciasis, schistosomiasis, lymphatic filariasis, trachoma, and soil-transmitted helminthiases. Recent research has investigated how MDA with ivermectin can affect multiple species of parasites where they co-circulate.

Infection and transmission of the Loa loa parasite

The focus today is on Loa loa – it is a filarial nematode that causes loaisis. Loa loa is more commonly referred to as the Africa eye worm because adult worms often occupy the conjunctiva (tissue covering the whites of your eyes). Adult worms travel under the skin and can live up to 15 years in humans. Females deposit microfilariae (Fig 1) which can survive up to 17 years. These microfilariae can be picked up by their intermediate hosts, Chrysops flies, where they continue their development and can be passed on to the next human host.

Loaisis has typically been considered a benign condition, especially in contrast to other filarial worms (onchocerciasis and lymphatic filariasis in particular). However, recent research suggest that there is an excess mortality risk associated with heavy Loa loa infections. It is thought over 10 million people have loaisis and it is found mostly in heavily forested regions in Central Africa (Fig 2).

Loiasis is not on the World Health Organization’s neglected tropical disease (NTD) list. Currently, the largest concern for loaisis is not individual infection, but complications it can cause. When individuals have heavy Loa-loa infections (>30,000 microfilariae/ml), treatment with ivermectin (such as during MDA for onchocerciasis and lymphatic filariasis) can cause severe side effects. Heavily infected individuals can actually die from encephalopathy caused by mass die-offs of microfilariae.  Since the 1990s, over 400 severe events have occurred. Because of these complications, in areas where these worms are co-endemic, mass drug administration has been suspended for lymphatic filariasis. There was a previous blog about using phones to identify heavily infected individuals so that they are excluded from treatment and MDA could continue in the region. However in regions where onchocerciasis is co-endemic, the benefits of ivermectin in reducing morbidity caused by onchocerciasis outweigh the risk of severe side effects. Because of this complication, there are regions where Loa loa presence has hampered control and elimination of NTDs.

How does treatment for NTDs influence loaisis infections?

Because Loa loa has not been the target of MDA campaigns, and in fact has often precluded treatment, little is known about MDA ivermectin campaigns on the prevalence and intensity of loaisis infections. A recent study examined three regions of Cameroon which covered a range of histories with community directed treatment with ivermectin (CDTI): from no CDTI ever, to 9 years and 14 years of CDTI. The objective of CDTI was reduction in Onchocerca volvulus but this study focused on the impacts on Loa loa transmission and severe side effects.

The study measured the prevalence and intensity of Loa loa infections across a range of communities. They were interested in how the number and adherence to CDTI affected changes in the number of people infected with loaisis and how many microfilariae they were infected with (measure of intensity). Because severe side effects are associated with heavy infections, the authors were also able to use these data to understand the risk of severe events during CDTI. Surveys of adults and children in 36 CDTI districts and 9 non-CDTI districts were selected for cross sectional surveys. These areas also had data from before MDA campaigns began. Individuals were tested for loasis and they were asked how many times they had taken ivermectin in their lifetime. All participants had lived in their surveyed area for at least five years.  Over 4000 people were recruited for the study.

The study demonstrated the CDTI for onchocerciasis also has positive impacts on Loa loa infections. CDTI significantly decreased the prevalence of loasis in the communities and reduced the average number of microfilariae found in a person. Lower infection intensities of Loa loa mean there are reduced risks for severe side effects when taking treatment. In addition, more rounds of ivermectin treatment reduced the prevalence of Loa loa (Fig 3).

Although CDTI was originally meant to control onchocerciasis in these regions of Cameroon, it has also had a significant impact in reducing Loa loa infections. This has benefits for individuals, but also for children born into the region. They are at lower risk for infection and  have a lower risk of developing severe side effects. Ideally, there should be safer drugs to combat L. loa infections, so that risk of these severe events is truly eliminated. However, this study provides evidence the high treatment coverage can reduce transmission of multiple diseases that impact human health. More work will be needed to understand true risks of these CDTI and to improve intervention planning for these understudied parasites.

I would like to make the following points
i ) Even though the repeated MDA with ivermectin for the control of Onchocerciasis has impacted significantly on the prevalence and intensity of Loa loa infection in areas of Co-endemicity ( with positive implication on the prevention of the risk of developing SAEs) this impact may not be sufficient to eliminate Loa loa from those areas, because Ivermectin has an inbuilt limitation to go beyond a certain threshold. It induces adverse events that contribute eventually to scarce people from taking this drug fully in L. loa endemic areas. When one combines systematic non compliers to the treatment and those who took the drug less than 4 times (low compliers), one have close to 60% of the population. This situation reduces the potential of Ivermectin to eliminate Loa loa from the entire population. Only those who comply regularly, have the maximun benefit of the treatment
ii) The coverage is an important parameter for the impact of the intervention, but the compliance is more important. One could have high coverage for the intervention, but if year after year some people skip treatment, it will eventually create a good reservoir of infection that will maintain the transmission.