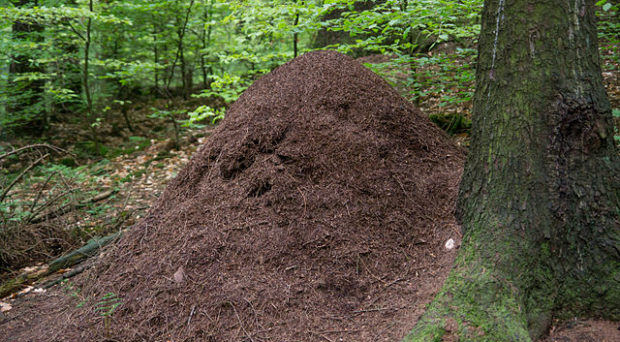 Researchers from Bern University have shown that the presence of red wood ants, Formica polyctena, is negatively associated with the number of questing ticks, with the volume of the ants’ nests being the most important variable. This was the first field study to investigate a relationship between red wood ant and tick abundance and was conducted in the cantons Basel-Land and Solothurn, North West Switzerland, part of the Jura Mountains.

The hard tick Ixodes ricinus is a blood-feeding arthropod and disease vector to a wide range of vertebrate hosts including humans. In Western Europe they are the most important vector for Lyme disease and tick-borne encephalitis, making them a prominent public health and veterinary issue.

The association found in this study gives backing to the exciting prospect of using red wood ants as a biological control against ticks. Biological controls are an attractive option for tick management due to concerns over the use of chemical controls.

Not to be taken for granted

Acting as biological controls is far from the only role red wood ants play in the ecosystem. They are a keystone species, meaning that they have a disproportionately large effect on their environment. Their mound building alters soil composition and nutrient flow, they predate invertebrates, and compete with other predators such as birds and other insects.

Conservation and promotion of red wood ants can help to maintain the forest ecosystems they inhabit across Europe and may potentially help to reduce tick numbers.

Red wood ants are social insects, building large dome shaped mounds made out of grass, twigs and conifer needles. Conservation and promotion of this species can help to maintain the forest ecosystems they inhabit across Europe and may potentially help to reduce tick numbers.

As a correlational study, the authors were unable to determine the mechanism underlying the negative relationship between red wood ants and ticks. However, they did speculate on some possible explanations.

One such explanation is predation. F. polyctena is among 30 ant species that are known to occasionally prey on ticks. Yet, as generalist predators, it is debatable whether red wood ants would prey on ticks enough to effectively reduce their numbers. In field studies the only ant species shown to be an efficient predator of ticks is the red fire ants Solenopsis invicta.

Another explanation is that formic acid sprayed by the ants repels the ticks. Ants release this volatile acid in defense or for trail markings. It therefore covers the area around nests. Several studies have shown the repellent effects of formic acid on ticks and some animals including capuchin monkeys even rub ants on themselves in a behavior called ‘anting’ which is thought to be to repel ticks and other ectoparasites.

Although there are several species of ant present in the forests of North West Switzerland, the authors choose to study F. polyctena because it was common, its habitat overlapped with hard ticks and in a previous study its presence was was shown to have a negative effect on tick burdens on hares.

To collect the data the researchers randomly selected 26 nest sites, pairing each with a control site where the ants were absent. They then recorded the abundance of both red wood ants and ticks at three 10x10m sampling plots at each site.

Ant abundance was estimated by using bait consisting of a tablespoon of tuna on a sheet of paper. The number of ants attracted to the bait can be used as proxy for the ant population in the surrounding area. Tick abundance was measured by dragging a white linen sheet through a predefined transect to collect questing ticks.

One limitation that the authors highlight is that reported tick abundance may have been influenced by habitat variables. Ticks prefer areas with good vegetation and litter cover as they rely on this for humidity, protecting them from desiccation. As would be expected, a correlation between litter depth and tick abundance was observed in the study.

However, counter intuitively, there was a negative correlation between vegetation cover and tick abundance. The authors theorize that the effectiveness of tick sampling was reduced in places with high vegetation cover, which has been shown to occur in other studies.