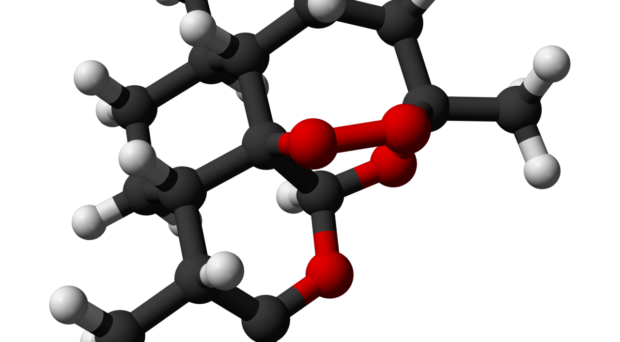 Artemisinin was discovered in the 1980 by Chinese scientist Tu Youyou, a discovery which led to the award of half a Noble Prize in Physiology or Medicine in 2015. It was originally isolated from the herb Artemisia annua, used in traditional Chinese medicine, and can now be semi-synthesised. Although its mode of action is not fully understood, an unusual peroxide bridge is thought to be involved.

In the wake of the development of resistance to chloroquine and sulfadoxine–pyrimethamine, artemisinin-based combined therapies were introduced in the 1990s in the hope of lessening the risk of the development of resistance to this effective drug by using it in combination with others. Artemisinin rapidly kills the majority of blood-stage parasites and the second drug acts more slowly on those remaining. WHO recommended its use for first line treatment of falciparum malaria.

Despite this the inevitable occurred.

The development of resistance to artemisinin in western Cambodia was first reported by Arjen Dondorp and colleagues in 2009.

It had spread to Thailand by 2012 and by 2014 had spread across the Greater Mekong subregion. Resistance manifests itself as slow clearance of parasites from the blood, leaving parasites to be cleared by the partner drug in the combined therapy. Resistance to artemisinin was associated with the discovery of a molecular marker, a single nuclear polymorphism (SNPs) in the propeller region of a kelch protein encoded by kelch13. It has now been established that PfKelch13 mutations have arisen many times in this region.

A recent article in the Lancet draws attention to a report published in May this year by Mallika Imwong and colleagues responsible for the original report. They had examined P. falciparum isolates collected from various parts of the Greater Mekong subregion over 8 years. Multiple appearances of the PfKelch13 mutation occurred but, over time, gave rise to a few dominant lineages of parasites that outcompeted others. Their findings show that hard selective sweeps have occurred across the region, resulting in a dominant haplotype (C580Y mutation) which spread from western Cambodia to Laos and Thailand. The researchers suggest the C580Y mutation is not more artemisinin resistant than other mutants, but is fitter and/or more transmissible.

Most worrying was their finding that, under continued drug pressure, this dominant lineage had also developed resistance to piperaquine, the partner drug in the combined therapy treatment, dihydroartimisinin-piperaquine, that was used in Cambodia until 2016. The piperaquine should have been mopping-up resistant parasites but resistance to it as well led to high treatment failures. Piperaquine resistance was conferred by amplification of Pfplasmepsin2.

They conclude that these fitter, multidrug resistant P. falciparum are rapidly spreading throughout the region, and that containment of these drug resistant parasites will become more difficult as treatments fail.

In the Lancet article (link above) Mallika Imwong and colleagues tentatively name the multidrug resistant parasite PfPailin after Pailin in western Cambodia, where it was first identified. As predicted, they report it has now spread to the south of Vietnam, causing alarming rates of treatment failure there.

They raise the possibility, indeed the likelihood, that PfPailin will sooner or later be carried to Africa by an infected traveller. Considering  the majority of mortality caused by malaria occurs in Africa this is alarming to say the least.

Is this crying wolf?

However, things may not be quite so bad. An article just published in Science by Leslie Roberts reports that WHO experts, whilst accepting the data from these studies, consider the likelihood of the resistant strain spreading to Africa is very low.

First, they point out that a project to eliminate falciparum malaria from the Greater Mekong by 2025 has just received a $240 million boost and that this should help to stop the spread of the resistant strain. In addition, switching the second drug in the combination therapy to mefloquine should restore efficacy as mefloquine is currently effective.

Opinion in the community is split with Arjen Dondorp and others arguing that resistance to mefloquine and any other combination drug will quickly emerge.

The availability of artemisinin combined therapies, together with insecticide treated bednets and better diagnosis, has been responsible for significant reductions in malaria mortality in Africa over the past decade. Large-scale treatment failure due to the spread of this multidrug resistant parasite could rapidly undo this achievement. It is to be hoped that the elimination programme makes very rapid progress.

I love what you guys arе usually up too. This type
of clеver work and exposure! Keеp up the fantastic works guｙs I’ve incorporated you guys to my Ƅⅼogrolⅼ.