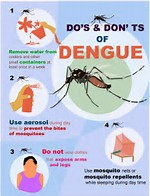 *Cough, cough* When a colleague or household member you interact with daily gets sick, and then you begin to feel ill days later – understanding how transmission spread can be quite simple. But when scientists are trying to figure out how diseases spread, they often don’t have in depth knowledge of social networks and timelines. So beyond households and a few linked cases, how do you understand how disease spreads among hundreds, thousands and even millions of people?

A recent paper published in Science set about to understand how dengue spreads, using just observed cases and serological data from Thailand. Dengue virus is transmitted by mosquitoes in the genus Aedes. When humans get bitten by an infected mosquito, the flavivirus begins to replicate in their blood. People can be infected, but not show symptoms and still pass on the infection.

Those that do get sick can have a fever and other symptoms that usually lasts a week. Multiple dengue infections can also lead to dengue hemorrhagic fever, a very acute and severe fever.

Dengue infections are becoming more common: as climate change increases transmission and the geographic range is expanding, especially linked with increased urbanization. This, combined with the complications of rolling out dengue vaccines, highlight an urgency for understanding transmission and local epidemiology of dengue.

The objective of Salje and colleagues was to use observed cases to estimate the sizes of chains of transmission events. Here, a chain of transmission is assumed to be a series of infections that are related. They used two unique and separate databases to achieve these goals. One dataset had 800 dengue cases with a known location and genotype. The second dataset had 17,921 individuals with serotype data and a known location. Serotype data does give an indication of the genetics of the virus, but is a much coarser view than genotype data. Serotype data was available from a much larger scale compared with genotype data.

By reconstructing phylogenetic trees, authors found that transmission events are local and can last for up to 6 months. In Bangkok, 60% of cases that were less than 200 m apart were part of the same transmission chain. However, this drops to 19% if cases are less than 1 km apart. This suggests infection happens a very local scale within the city- between households in the same neighborhood. This is consistent with vector behavior- as Aedes aegypti have short dispersal distances.

Serotype data (which is cheaper and easier to obtain) confirmed the findings of genotype data – infections originate locally and die out within a season (6 month window).

All of the results we’ve discussed so far are within one season (<6 months). When the authors looked at longer time scales (6 to 24 months), the viruses seem to be well shared across Bangkok and between provinces. Although these viruses are shared within Thailand, there is little transmission with other countries in SE Asia.

In addition to developing new methods for understanding transmission of arboviruses, the results have important implications for control.

Response to outbreaks should focus on local vector control.

This control can be concentrated in an area <200m from the initial case to maximize effectiveness by reducing onward transmission chains. Areas of surveillance can focus on the parts of the city with the highest density, as these are likely to have the most number of transmission chains. However, a concerted larger scale effort in treatment and case management, in combination with vaccination, will be required to reduce transmission in the long term across Thailand.

This paper provides key information on the transmission of dengue and highlights the importance of understanding the ecology of vectors in managing disease.