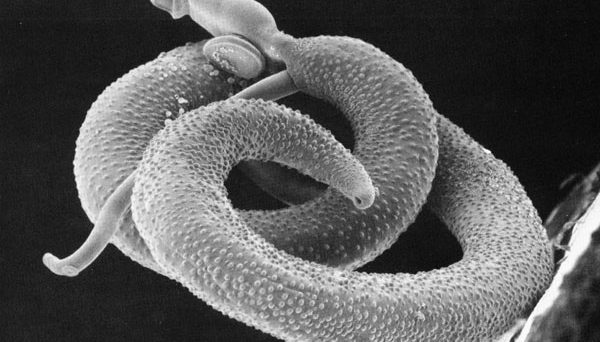 Schistosomiasis is a terrible disease. It is caused by trematodes of the genus Schistosoma and affects 250 million people worldwide, many of whom are children. The WHO estimates that 200 000 deaths per year are due to Schistosome infections. While this death toll is appalling enough, schistosomes are equally horrible even when they don’t kill. These worms infect the circulatory system, resulting in a chronic infection that causes anemia, morbidity and developmental delays.

The costs of infection

The cost of this chronic infection overall is poor health and can be measured in disability-adjusted life years (DALYs). DALYs quantify “the numbers of years lost due to ill-health, disability or early death”. In 2010 the total estimated cost to the world from schistosomiases was 3.3 million DALYs. This figure is staggering when we remember that so many of these patients, whose lives are being cut short or hindered, are children.

If an effective vaccine existed, targeted treatment of children could drastically reduce the number of DALYs lost. As it stands now though, the only treatment available is mass drug administration, but this is not good enough due, among other things, to the potential for the evolution of resistance.

Treatment with drugs is purely a Band-Aid solution. Once the worms are eliminated there is nothing stopping a host from being re-infected, meaning constant monitoring and re-administration of drugs is inevitable. A vaccine, however, could prevent all this, protecting against re-infection and reducing the number of parasite eggs shed by hosts; thereby effectively halting transmission.

Similar to the incredible success in Dracunculiasis control, if the transmission is halted, parasite numbers would dwindle and fade over time.

A vaccine: the Holy Grail

In theory, it should be possible to produce a vaccine against parasites because many animals develop natural resistance to parasites as they age, by mounting an immune response against them. However, vaccines against helminths have been notoriously hard to develop. Unlike microbes, the size of helminths precludes their being engulfed by phagocytes and their surface rapidly changes as they cycle through unique developmental stages.  Finding an appropriate vaccine target on the worm surface that can stimulate a sufficiently long-lasting immune response has been incredibly difficult. The fact that many parasites, including schistosomes, use surface molecules to evade and/or suppress host immunity only adds to the problem. New hope in this search has now arrived, by looking inside rather than out.

Instead of targeting surface membrane antigens, new vaccine candidates are being found by focussing on the parasite’s excretory-secretory products (ESP). ESPs are proteins produced within the worm (usually the gut) that make their way out during activities like feeding. A group of ESPs, known as cysteine peptidases, have recently shown potential as vaccine targets.

Cysteine peptidases are used by many parasites to cleave host proteins and degrade tissues during their travels through host bodies. Adult Schistosomes secrete them during blood feeding and they have previously been identified as potential drug or vaccine targets. When the cysteine peptidase cathepsin B1 comes into contact with the host’s internal environment it elicits an immune response. The ability to incite an immune reaction, coupled with the fact that cathepsin B1 is one of the most prominent ESPs secreted by Schistosomes makes it an ideal vaccine target. In initial trials were mice were inoculated with cathepsin B1 and then exposed to infective Schistosome cercariae, highly significant decreases in both worm burden and parasite eggs counts were recorded. Emboldened by this highly promising result, researchers have now tested a second peptidase, cathepsin L3, in the hopes that it too may have similar protective effects.

In a paper released last March by PLoS Neglected Tropical Diseases, the results of trials using both cathepsin B1 and L3, on their own and in combination were reported. For this study, both cathepsin molecules were used as the basis for an adjuvant-free vaccine.

Trials showed both molecules were capable of inducing an immune response; however, the cathepsin L3-induced response was weaker. However, despite the weaker response, the protective ability of cathepsin L3 was similar to cathepsin B1. Both formulations were able to protect mice from infection, offering a 54-65% reduction in worm burden and a reduction in egg production and viability.

With their ability to incite the immune system and proven ability to protect mice established, researchers next tried them in combination. Unfortunately, the two cathepsin molecules working together did not increase either the protective abilities or immune responses. In a final twist, cathepsin B1 and L3 were next combined with a third ESP, glyceraldehyde 3-phosphate dehydrogenase (SG3PDH).  The trio of ESPs again induced an immune response, and this time boosted the reduction in worm burden above an impressive 70%.

SG3PDH is not a gut-derived peptidase like the cathepsin molecules.  It is expressed on the surface of larval Schistosomes as they migrate through the body, after which it is expressed as an ESP in adults. The exact mechanisms behind the success of the three ESPs, in combination or alone, are, as of yet, unknown. However, the expression of SG3PDH during larval stages may activate different immune responses than those provoked by the cathepsin molecules. It is possible then, that the combination vaccine is working via multiple avenues to confer protection. For instance, the targeting of cathepsin, essential to blood feeding, may be invoking an immune response as well as interfering with worm feeding, and consequently egg production. The researchers speculate that this may be the reason behind decreased egg production and viability when these molecules were used in the vaccine. Despite the lack of a clear mechanism of how ESP derived vaccines are providing protections, the results were extremely positive and have been replicated in two mammalian models; mice and hamsters.

The WHO set a low standard of 40% reduction in worm burden in an experimental host for the sponsorship of a vaccine pre-clinical trial.  The performance of the three ESPs, cathepsin B1, L3, and SG3PDH, shattered this threshold, and the authors of the study hope this data spurs further trials of cysteine peptidases alone, or in combination with other ESPs, using non-human primates.

The path towards a schistosome vaccine is an arduous one, but this research shows a promising way forward. Even if complete protection isn’t achieved, reductions in re-infection rates and egg shedding back into the environment will give those living in endemic areas a greater chance to remain worm free. For thousands of children, remaining worm free gives them the chance to do better in school and live the fuller, long life they deserve.

I don’t know how I missed this – just saw it tonight while I was browsing during the Man Utd/Real Madrid match. Nice overview Bradley.

Many thanks – John Dalton