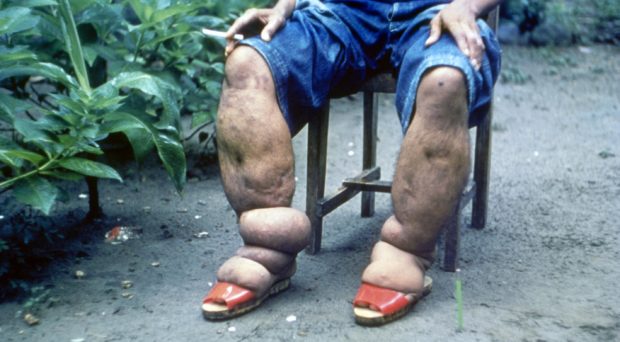 Two of the critical behaviour patterns performed by insects that transmit parasitic diseases (vectors) are host seeking/blood feeding and egg laying. The former is vital for female insects to obtain the protein meal necessary for maturing a batch of eggs and also for the viruses, protozoans and worms she might be harbouring, as this is their only means of transmission to their next host.

Behavioural changes associated with insects acting as disease vectors have been documented many times. In particular the changes in anopheline mosquito blood-feeding behaviour, associated with malaria infection, have been studied for several decades and were the subject of a previous BugBitten blog. Likewise, the reduction in mosquito fecundity following infection has been well researched.

Now a recent study by a group at the Liverpool School of Tropical Medicine has found similar changes when the culicine mosquito, Aedes aegypti, is infected with the roundworms that cause lymphatic filariasis.

This disease is caused by thin, roundworms that live in the lymphatic ducts, blocking them and causing fluid retention and swelling. This can lead to a condition known as elephantiasis which is irreversible. People are infected via the bite of a mosquito infected with mature, third larval stages of the parasite (L3), known as microfilariae. When taken up from the blood of an infected person microfilariae migrate through the mosquito gut to the muscles in the thorax where they go through moults to become L3 larvae. They then migrate to the mosquito mouth parts ready to move onto human skin when the mosquito takes the next blood meal. They enter the human through the wound made when the mosquito bites then move to the lymphatic system where the females produce thousands of microfilariae daily.

In this recent study, mosquitoes were infected with the filarial nematode Brugia malayi, one of three species causing lymphatic filariasis, by allowing them to feed on human blood containing B. malayi parasites or on uninfected blood (controls). Following experiments, the mosquitoes were dissected to recover the microfilariae, either whilst they were still developing, or after 11 days, once they were L3 larvae in the mouthparts. Mosquitoes were grouped according to the number of microfilariae they harboured. Many of the microfilariae that were ingested did not survive and by day 11 numbers had fallen to a mean of 1.3 (low density group) and 3 (high density group).

The investigators tested the behavioural response mosquitoes made to the proximity of a human hand after having been starved for 18 hours. Mosquitoes were kept for a short period in one of two cages joined by a tunnel. The barrier between the cages was then opened, allowing access to the second cage, close to which a human hand was held. Four minutes later the barrier was closed again and the number of mosquitoes that had flown into the cage with the hand was noted.

Older control mosquitoes showed a significant decrease in their attraction to the human hand (behaviour the researchers called convergence) which may have been related to senescence. In contrast, the presence of the parasites reversed this behaviour.

Far fewer mosquitoes infected with immature (pre-L3) larvae passed into the second cage. However, the opposite occurred a few days later when the parasite larvae were mature and infective (L3 larvae).  Significantly more of these mosquitoes converged on the human hand than the controls. These findings suggest mosquitoes harbouring mature L3 larvae may be more likely to blood feed and pass on the parasites whereas they are less likely to engage in this risky behaviour (potentially getting swatted) when blood feeding is of no advantage to the developing parasites. Furthermore, a density dependent effect was noted. Mosquitoes with higher worm burdens exhibited greater convergence behaviour when the worms were mature but, surprisingly, also when they were immature.

In addition to looking at host-seeking behaviour, this research group investigated another common phenomenon seen in parasite-infected insects; a reduction in reproductive success.

This drop in egg production also occurred in those mosquitoes that were fed microfilariae but in which no parasites developed.

Studies from my laboratory and several others have identified behavioural changes associated with malaria-infected anopheline mosquitoes that also suggest exposure to hosts is reduced when parasites are developing, but enhanced when parasites are infective. Whether these changes are driven directly by these unrelated parasites or are a result of physiological / immunological response to infection made by both Anopheles and Aedes mosquitoes remains to be seen as our understanding of the mechanisms that drive blood feeding are poorly understood.

In contrast, mechanisms behind fecundity reduction have been well studied in a malaria/mosquito model where cells in the ovarian follicles of infected mosquitoes undergo apoptosis and developing eggs are reabsorbed. As stimulation of the immune system induces a similar effect it would appear that this may well be a mosquitoes’ response to infection in general with resources being traded-off between immune defence and reproduction, a common trait which may well also be happening in filarial-infected Aedes. The intriguing finding that reproductive fitness costs also occurred when mosquitoes were exposed to infection but where microfilariae did not manage to survive and develop, support this hypothesis. Perhaps the successful deployment of the immune system resulted in their disappearance, but at the expense of egg production.

These findings are certainly worthy of further investigation, especially as they could affect transmission dynamics of filarial worms and maybe other parasites transmitted by Aedes aegypti in the field.