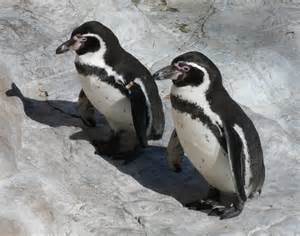 Longleat, the world’s first safari park, recently announced that many of their penguins had died of malaria. The popular safari park, located in Wiltshire, lost 25 of its breeding colony of Humboldt penguins and Penguin Island closed as devastated keepers cared for the remaining birds.

This announcement followed on the heels of a similar outbreak of avian (bird) malaria at Exmoor Zoo over 100 miles away in Devon. This outbreak killed all 10 of its Humboldt penguins.

Surprisingly, outbreaks of bird malaria in captive-bred colonies of penguins are not uncommon. London Zoo lost 6 Humboldt penguins to malaria in 2012, though many were saved by treatment with an antimalarial drug. The penguins are regularly dosed with tablets hidden in the fish they are fed. Keepers also use lavender to repel the mosquitoes that carry the malaria parasites, spraying lavender oil in their nest boxes and planting bushes around their enclosure.

Magellanic penguins have also been reported to suffer substantial mortality as a result of infection with various species of avian malaria when undergoing rehabilitation in centers along the coast of Brazil. No wild Magellanic penguins were found to be infected, suggesting conditions during captivity may have caused the problem.

These penguins are endemic to the coasts of Peru and Chile. The cool windy conditions here are not ideal for the mosquito vectors of bird malaria.  Their populations are susceptible to climatic changes caused by the effects of El Niño and they have been given the status of “vulnerable” by the International Union for the Conservation of Nature.

More than 60 species of malaria parasites are known to infect birds. Unlike mammalian malarias, bird malarias are transmitted by Culex mosquitoes. When the parasites are first introduced into a bird with the saliva of an infected mosquito they invade reticuloendothelial cells that are near the site where the mosquito bit. These are the phagocytic cells of the immune system, whose function is actually to engulf and destroy intruders. Despite this, the parasites are able to divide and multiply in these cells, eventually causing the cells to burst, releasing more parasites to spread in the blood stream.

They then either invade new reticuloendothelial cells present in a variety of tissues, or invade red blood cells (bird red blood cells are oval in shape and have a nucleus). In both cases they multiply again. The invasion and multiplication cycles continue, building up high densities of parasites and destroying host cells. Instead of producing more cell-invasive stages they can produce sexual stages, known as macro and microgametes. It is these stages that will develop in a mosquito if imbibed with a blood meal. In this way the parasite is passed on to its vector again.

Wild birds rarely die from malaria. However, in Hawaii, where birds have only recently been exposed to this infection, ten native species of birds have become extinct due to mortality caused by the malaria parasite.

Although not often fatal, avian malaria can severely weaken wild birds and a finding reported in a BugBitten blog in February, 2015 showed how the lifespan of Reed Warblers and their offspring was reduced by chronic malaria infection because of shortening of their chromosome telomeres.

Avian malaria is now thought to be spreading due to climate change and infected birds have recently been discovered in Arctic regions, including Alaska.

Captive penguins are highly susceptible to infection with malaria.

A review article by ML Grilo and colleagues, published in Avian Pathology, suggest penguins are particularly vulnerable because, in contrast to wild bird populations from areas where they are exposed to avian malaria, they are from cold, windy environments unsuitable to the transmission of mosquito-borne diseases. Because of this they are not evolutionary or physiologically adapted to these protozoan parasites. Removal from these natural habitats to be kept in captivity in environments where avian malaria transmission occurs can thus place the penguins in danger.

Although their dense covering of feathers offers some protection from mosquito bites, a spokesman from Exmoor Zoo suggested penguins may be particularly vulnerable in summer when they moult as more skin is exposed.

Where does the penguin infection come from?

Although avian malaria is transmitted by a wide variety of bird-feeding mosquitoes, Culex species are the most likely vectors of infection in zoo birds. It is thought that mosquitoes breeding in or near zoos become infected by feeding on local wild birds that are generally not so susceptible to the disease.

A study of dead birds, collected by the public in Eastern Austria, as part of a surveillance exercise for an emerging disease caused by Usutu virus, investigated this idea. The study revealed the presence of 3 different species of avian malaria parasites in the tissues of wild passerine (perching) birds that likely died of the infection. These deaths are surprising as past studies suggest wild bird mortalities due to malaria are rare.

The parasites identified in these dead birds had identical species lineages to those found in penguins in the Vienna Zoo. This finding thus supports the view that wild birds act as reservoirs for infection of the much more susceptible zoo colonies of penguins.

Different species of malaria parasites infect a variety of reptiles, birds and mammals, and in many cases may have co-evolved with their hosts, to be tolerated rather than causing fatal infections.  As this does not appear to be the case with penguins and avian malarias, zoo keepers have the difficult task of protecting their captive colonies from mosquito bites, or abandoning maintaining these most popular exhibits.