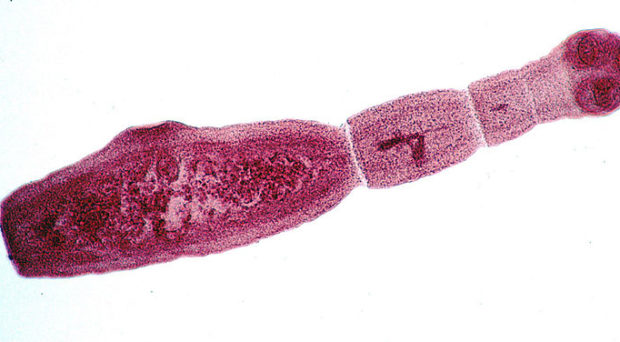 Vegetables, fresh fruit and mushrooms represent a potential source of infection by a variety of pathogens including the tapeworms, Echinococcus granulosus and E. multilocularis. The sexually reproducing forms of both of these worms use various canines as their hosts. Unlike the typical image of a tapeworm, these are only a few centimetres long. Large numbers of them live in the gut and shed eggs that are voided with the faeces and thus contaminate the environment.

People can be infected if they accidentally ingest eggs, either by intimate contact with an infected canine (most usually dogs, so don’t let them kiss you) or via contaminated fresh produced, grown in areas where infected canines may defecate.

In both cases eggs hatch in the gut, but the resultant larvae do not live there. They enter the blood stream and invade tissues, usually the liver, and form large cysts where they reproduce asexually forming hundreds of a larval form called protoscoleces which will develop into an adult tapeworm if eaten by a carnivore

For both tapeworms, a sylvatic life cycle exists whereby wild ruminants or domestic sheep, goats or camels usually act as the secondary host for E. granulosus and small rodents for E. multilocularis.

The life cycle only continues when raw or undercooked, infected, flesh is eaten by another canine. Humans are thus a dead-end host for this zoonosis.

E. multilocularis causes alveolar cystic echinococcosis (AE) in which multiple small cysts are formed that spread throughout the internal organs. The disease progresses slowly and can be asymptomatic for as long as 15 years, but eventually produces disorders similar to liver cancer.  It is extremely pathogenic with a fatality rate reaching over 50%.

A study in Poland

In 2015 a study, conducted by Anna Lass and colleagues, focussed on Varmia-Masuria Province, Poland. Here the prevalence of E. multilocularis in foxes is as high as 50% and the area has the highest number of cases of AE in Poland.  The transmission routes of this tapeworm were unknown.

One hundred and three samples of fruits (various berries) vegetables and mushrooms were collected from kitchen gardens, forests and plantations and analysed for the presence of E. multilocularis DNA.

Initial work, performed by artificial contamination of purchased fruit and vegetables suggested that many eggs were lost during preparation for DNA extraction, amplification and sequencing, as their previous work showed they could detect the presence of a single isolated egg.

Nevertheless, when their protocol was used with samples collected from the wild, the tapeworm DNA was detected in 23.3% of samples from gardens, forests and plantations. The highest proportion of contaminated samples being those collected from kitchen gardens.

Interestingly the authors noted a large increase in the fox population had been occurring in Varmia-Masuria Province at that time and people living there often consumed their own home grown fruit and vegetables and also collected fruits and mushrooms from the forest. They concluded that consumption of fresh fruits, vegetables and mushrooms could pose a risk of infection by this highly pathogenic tapeworm.

Their findings have recently been challenged by Lucy Robertson and colleagues.  These researchers recognise that Poland has a relatively higher incidence of AE than other Baltic countries. However, they propose that the inferences with respect to the danger posed by eating fresh, raw produce from the area that were made in the 2015 paper may have been too dramatic and cause undue concern.

They based their criticism on a number of points, including;

The authors of the original paper have just published a reply to this challenge.

The authors do not think the results of their study surprising as they were sampling sites with the highest risk of contamination. They reaffirm that although the risk of infection is unknown, public awareness of this risk of contracting AE in these areas should be increased and eating unwashed fruit and vegetables should be avoided.

Clearly there was no intention of scaremongering with respect to eating Polish fresh fruit and vegetables on the author’s part. As with all parasitological research, a fine line must be drawn between dissemination of information and the induction of panic.