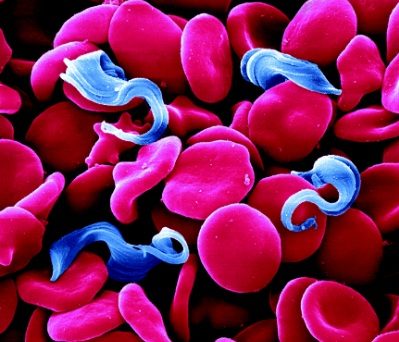 Trypanosoma brucei, the parasite that causes Human African Trypanosomiasis (HAT or sleeping sickness), is transmitted from person to person via the bite of a tsetse fly. This disease is therefore confined to rural areas of sub-Saharan Africa were the tsetse flies are found.

The single celled parasites do not live inside host cells, but move through body fluids with the aid of a whip like flagellum which is attached to the cell body for part of its length. Initially they live in the blood, lymph or fluid between the cells of organs and later cross the barrier between the blood and the brain, the blood-brain barrier; one of very few parasites that can do this.

As the parasites divide and multiply they can sense their rise in numbers (by quorum sensing) and change from slender to stumpy forms that are capable of infecting anther tsetse fly, should they be sucked up during blood feeding. In the tsetse fly they differentiate into a third, procyclic, form.

Considerable differences in gene transcription occur between the different forms. This may, in part, reflect the different ways in which they produce energy in the different hosts. In the tsetse fly they use amino acids, particularly proline (which is abundant in many insects), whilst in the mammalian host they use glucose. So far there had been no evidence that they can use fatty acids as a source of energy. Despite this, they have genes necessary for ß-oxidation of fatty acids. So, why are these genes present in the genome? Can they use fatty acids as an energy source and, if so, why has this not been detected by researchers?

A multinational team, largely based at the University of Lisbon, Portugal, have recently identified a further site where T.brucei parasites reside that may shed light on this puzzle.

Using a mouse model, Luísa Figueiredo and her team found that, after an initial peak in parasite numbers 5-6 days post-infection, the infected mice lost weight. This loss was only associated with loss of fat deposits, not organ weight loss.

They employed immunohistochemistry to search for trypanosomes and then genomic DNA to quantify them, both early post-infection (6 days) and after 28 days. Surprisingly, in addition to the expected parasite niches (blood, heart, lungs, kidney and brain), they found many parasites in fatty (adipose) tissue.

By day 6 post-infection parasite density was highest in the blood, but there were 60-fold more parasites in the fat tissue than the organs; only 7–fold less than in the blood. At day 28, adipose tissue was the compartment with the highest parasite load. Their presence was confirmed using transmission electron microscopy; parasites were all extracellular and located in the space between cells and the capillaries. Slender, intermediate and stumpy forms were all detected.

Fat was shown to be the major reservoir for parasites whether infection was initiated from injection of blood-stage forms or via the bite of an infected tsetse fly, and regardless of mouse sex or strain.

Using a variety of techniques, the researchers confirmed that trypanosomes in the adipose tissue were replicating and were also capable of infecting another mouse. In other words they could reinvade the blood system.

A comparison of the gene expression of trypanosomes in fat tissue, in the blood or in culture revealed significant differences in transcription between blood and fat body parasites. These indicated upregulation of several metabolic pathways, including glycolysis, in parasites from adipose tissue.

One of the most interesting conclusions from examining gene expression was the likely presence of active fatty acid ß-oxidation which produces energy from the breakdown of fatty acid. The group confirmed this by following the fate of a radioactively labeled fatty acid, finding that it was taken up followed by ß-oxidation intermediates being produced.

The researchers suggest the differences in gene expression between parasites found in the blood and those in adipose tissue may reflect an adaptation to their glucose poor and lipid rich environment relative to the blood.

Fatty acid ß-oxidation had not been detected in any of the life cycle stages of trypanosomes before. This research clearly demonstrated that trypanosomes were indeed able to utilise fatty acids as an energy source if they inhabited this new site.

These findings raise a host of interesting questions. One obvious one, why do trypanosomes accumulate in fat tissue? led the authors to suggest it may be a privileged site offering some protection from the immune system.

If trypanosomes can pass to and fro, do the fatty tissue forms act as a reservoir that can change the dynamics of stumpy form development in the blood  and possibly even trigger antigenic variation leading to the expression of different Variant Surface Glycoproteins?

If trypanosomes residing in adipose tissue are metabolising fatty acids how do they access them? Are fatty droplets taken up by endocytosis? Does utilising this energy source explain the weight loss associated with trypanosome infections? Most intriguing is the observation that the brain is a lipid-rich tissue leading to the question; is parasite gene expression altered in this site and could this impact on pathology?

Luísa Figueiredo’s team considers these and many more questions in their report of a fascinating study. Hopefully they will provide the answers to some of them in the near future.