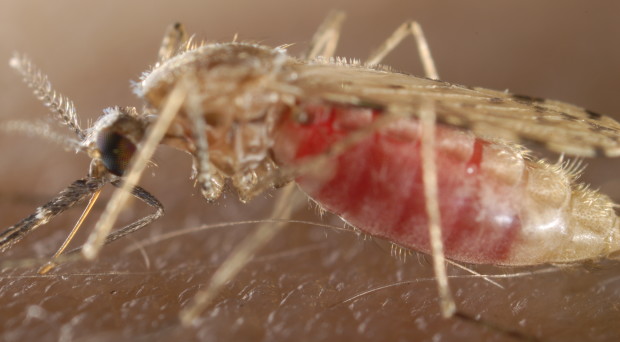 Malaria is an incredibly important disease in humans- causing almost 200 million cases and leading to 500,000 deaths annually. In spite of this immense global health burden, we still don’t understand many of the nuances of malaria parasite transmission, particularly the effect of the parasite on the life history of its mosquito vector.

We used to think that parasites had negligible effects on vectors, however more and more studies are revealing that parasites actually can impact the fitness of vectors. This includes parasite-related increases in vector mortality, decreased vector fecundity, and augmented immune responses.

When mosquitoes take a blood meal from a human infected with malaria, they can ingest parasite gametocytes.  These gametocytes then begin a complex part of their life history: undergoing sexual reproduction, development, and production of sporozoites. These sporozoites migrate to the mosquitoes’ salivary glands where they can then be transmitted to new hosts. The invasion of parasites into mosquito tissues and development within the vector induces an immune response. Malaria infection is also known to decrease survival of mosquitoes.

While we have begun to understand malaria’s impact on mosquitoes, few studies have examined how co-infections with different strains or species of malaria parasites affect mosquitoes. In some malarious areas, transmission and parasite diversity is incredibly high, and mosquitoes can be co-infected with multiple parasite strains at the same time throughout their short adult lifetimes (up to 30 days). Although coinfection with malaria strains is well documented in humans, very little is known about multiple infections in vectors.

What happens in mosquitoes?

Taking all of this into account, Pollitt and colleagues  set up elegant experiments to examine how multiple infections affect mosquito survival and parasite development. They used two rodent malaria strains (ER and AJ strains of Plasmodium chabaudi) and a mosquito vector (Anopheles stephensi) to examine the effect of all possible interactions on the survival of, and parasite density within, 1,631 mosquitoes for up to 72 days.

In the largest experiment, 21 cages were used- each treatment was repeated in 3 cages with approximately 100 mosquitoes each. All mosquitoes received unlimited access to sugar and were given two blood meals to control for effects of access to resources on outcomes.

The authors provide strong evidence that the increased likelihood of a parasite establishing in a mosquito that was already infected is unlikely to be related to individual mosquito variation in susceptibility to infection or blood meal quality. They instead suggest that the first infection facilitates establishment of the second. The mechanism behind this phenomenon still requires further research, but they hypothesize that it is due to suppression of the vector’s immune response by parasites or by physical damage to the mosquito’s midgut. When parasites form an oocyst, they must penetrate the midgut – the damage caused could make it easier for other malaria parasites to complete this stage of the life cycle.

Why is this so surprising?  It’s unexpected because different strains and different species of malaria parasites in vertebrate hosts have been documented to compete with one another across a variety of playing fields.  Multiple infections can exclude or suppress subsequent malaria parasites.  Why this isn’t true for the vector, we do not know, but it may be related to the much lower number of parasites in vectors.  It is an important reminder that one size does not fit all, and patterns observed in one host are not applicable to all hosts of a given parasite group.

The findings have important implications for malaria control.  Secondary infections are not only possible, but also more likely to establish than primary infections. Thus, in areas where there is a high diversity of parasite strains, this study underlines the importance of decreasing chances for multiple infections in mosquitoes, either through reductions of vector biting or population management. This study demonstrates that multiple infections with malaria in mosquitoes have non-linear impacts, and the authors estimate up to 17% of infected mosquitoes could have multiple infections. While the mechanisms underlying this effect are unclear- it is definitely deserving of more research.

Moreover, this study is a great example of the power of studying the ecology and life history of not only malaria parasites and their vectors, but the complex interactions of the community of parasites and vectors involved in the transmission of these important vector-borne diseases.