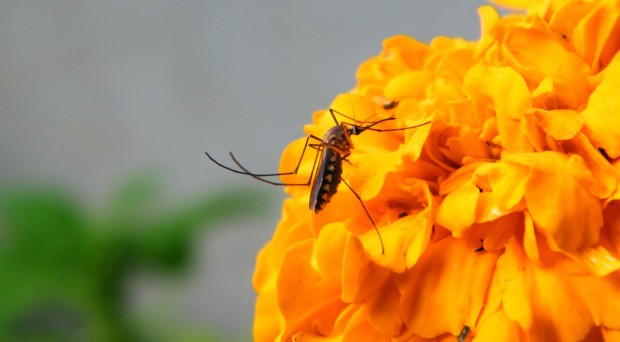 Like many other insects, mosquitoes also feed on flower nectar in addition to the females taking blood meals (Image: Wikicommons)

Parasite manipulation of hosts captures our imagination. From fungi that infect insects, causing them to climb to treetops and then bursting forth from their brains, to toxoplasma-infected rats loosing their fear of cats (national geographic: mindsuckers). Bordering on fantastical, these real-life horror stories are commonly discussed in popular media.

When a parasite trait causes the behaviour or biology of it’s host to change in a manner that benefits the parasite, it is termed parasite manipulation. Manipulation often positively influences transmission of the parasite to the next stage of its life cycle, as any change (e.g. mutation) that confers a transmission advantage will be heavily selected for.

In a recent Bugbitten blog, Lauren Cator discussed the manipulation of mosquitoes by malaria parasites. While a growing body of research supports Plasmodium manipulation of the mosquito, evidence that manipulation for increased transmission also occurs in the vertebrate host is sparse.

Megan Kelly and co-authors recently published a study that sought to establish a proximate mechanism by which malaria parasites may indeed signal to, and attract, their mosquito vectors from within the vertebrate host. In this laboratory-based study, the authors cultured asexual Plasmodium falciparum parasites and sampled volatile compounds that were emitted from the culture (the ‘headspace gas’).

The investigators were particularly interested in an organelle of Plasmodium parasites called the apicoplast, an interesting structure with a similar endosymbiotic evolutionary origin as a plant’s chloroplast (hence the malaria parasites’ phylum, Apicomplexa). Previous studies had suggested that the apicoplast has only one essential function during the malaria parasites’ development within red blood cells; the production of compounds called terpenes, via the methylerythritol phosphate (MEP) pathway.

Terpenes belong to a class of compounds called isoprenoids. Many animals, plants and fungi produce terpenes: not, however, vertebrates. These are characteristically volatile compounds (easily vaporise at low temperatures), and often represent the primary constituents of essential oils (hence ‘turpentine’, derived from the distillation of resins).

Although female mosquitoes require protein-rich blood meals in order to develop eggs, the basic metabolic functions are supported by nectar-feeding from flowers, as is always true for an adult male. Studies have indicated that some flowers and plants are attractive to mosquitoes, for example Anopheles gambiae (the primary mosquito vector of malaria in Africa) is thought to like Asteracaeae spp. and Ricinus cummunis. These plants are known to produce volatile compounds, or odorants, including terpenes – and these phytoattractants (phyto meaning of a plant have been shown to directly mediate the attraction of An. gambiae.

Kelly and her team detected terpenes in the headspace gas that they collected. This finding was reinforced by demonstrating the presence of a terpene, α-pinene, in an organic phase extracted from parasites that had been isolated from the infected red blood cells.

By treating cultures of P. falciparum with fosmidomycin, the investigators inhibited the enzymes of the MEP pathway, therefore preventing isoprenoid (and terpene) biosynthesis. In subsequent analysis of the organic phase from these inhibited cultures, the abundance of α-pinene was dramatically reduced. As it is known that RBCs neither produce isoprenoid precursors (IPPs) nor store them, it appears most likely that the origin of the previously detected IPPs was indeed the MEP pathway in the apicoplast of the parasite.

A mechanism for increased attraction?

This study has established a possible mechanism by which parasites could signal to mosquitoes from within the vertebrate host. Terpenes could readily pass over alveolar membranes and into the gas of the lungs, where they would be exhaled. Mosquitoes, already primed for attraction towards terpenes and similar compounds as part of the nectar-feeding process, could be attracted to these on the breath. By using a sophisticated mosquito olfactory receptor expression system, the authors confirmed that receptors of Anopheles gambiae respond to the terpenes (+)-limonene and α-(+)-pinene.

While evidence suggests that each component of the proposed pathway exists, further studies are necessary for both verification of the pathway and extrapolation to a natural setting.

Other questions arise – transmission will only be enhanced when the gametocytes, the transmissible stage of malaria parasites, are present. These are morphologically quite different to the asexual stages under investigation here. While the gametocyctes do indeed harbour a functioning apicoplast, its structure and function remains unchanged while the mitochondria enlarges due to its increased activity during this lifecycle stage. If the production of terpenes by parasites really does attract mosquitoes and further parasite transmission, should the production of terpenes by the apicoplast be up-regulated in the gametocytes?

Additionally, by hijacking the nectar-feeding olfactory response, parasites would attract both male and female sugar-seeking mosquitoes to malaria-infected vertebrates, which should be easily observable by field entomologists, but has this been reported?

In presenting a possible mechanism for manipulation, as opposed to evidence of the outcome (e.g. increased attractiveness), this study presents a fresh take on Plasmodium manipulation of the vertebrate host. With answers remaining elusive, this is an exciting field in science, and it seems that the complexities of malaria parasite-vector-host interactions are only just starting to be unravelled.