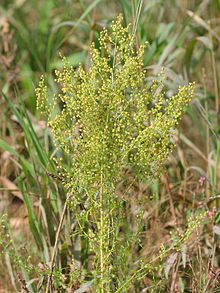 Artemisinins are currently the most effective drugs for treating falciparum malaria, but the spread of resistance in parasites circulating in South East Asia is putting the recent reduction in global malaria mortality under threat. Huge efforts are being made to contain and eliminate resistant parasites, but until recently the biochemical targets of artemisinins and mechanisms underlying the development of resistance were poorly understood, hampering our ability to circumvent this resistance. Recent advances are now giving grounds for hope.

Artemisinin, also known as Qinghaosu, is extracted from the sweet wormwood plant and has been used in traditional Chinese medicine for 2000 years. It can now be made artificially.  Artemisinin and its derivatives (ARTs) act as pro-drugs in vivo. It has been suggested that they are activated by an iron source that could be heam.  After cleavage of the endoperoxide ring the free radicles that are released cause cellular damage. Thus survival of malaria parasites when exposed to ARTs depends on their ability to protect themselves from this cellular damage.

It is known that parasites exposed to ARTs exhibit an accumulation of ubiquitinated proteins, indicative of cellular stress. Resistance has been associated with increased levels of the enzyme phosphatidylinositol-3-kinase (PfPI3K) in the human malaria parasite Plasmodium falciparum.  An international group of researchers have now developed a model that links this kinase with another molecule associated with resistance to ATRs.

Mbengue, Haldar and colleagues reveal that dihydroartemisinin (the active form of all artemisinins) is a potent inhibitor of PfPI3K and inhibition studies and molecular modelling suggested dihydroartemisinin specifically targets PfPI3K. However the researchers also turned their attention to another molecule because previous studies of genome wide variations in P. falciparum susceptible and resistant samples showed not all resistant strains had PfPIK3 polymorphisms. That study had identified selective pressure in regions of chromosome 3, particularly pfkelch13. In December last year researchers confirmed that K13 mutation plays a central role in resistance to ARTs. The P. falciparum Kelch protein, PfKelch13, is now considered a primary marker of artemisinin resistance.

A clue came from knowledge that PfPIK3 phosphorylates a lipid to produce phosphatidylinositol 3-phosphate (PI3P), which is more abundant in resistant ring stage parasites (the early blood stage form).   They also observed ubiquitination of PfPIK3. Molecules thus tagged became fragmented and thus inactive. Polyubiquitination of PfPI3K drives degradation of this P. falciparum kinase. Ubiquitination of PfPI3K was reduced in the resistant mutant, as was its breakdown, thus leading to increased levels of the kinase. In support of this model (see figure), the lipid product of PfPI3K, PI3P, was increased in early ring stages of resistant parasites, probably because of the increased levels of intact PfPI3K. The authors suggest PI3P may be involved in a downstream cascade that may influence cell survival via redox, transcriptional and DNA repair pathways.

They also suggest that other genes may be involved in artemisinin resistance but PfPI3K is the only known target of the dihydroartemisinins in the ring stages, where clinical resistance develops, and conclude that PfPI3K may represent an important target for future malaria control.

The role of the proteasome

P. falciparum strains with a mutation in the Kelch domain (K13) was a focus of another paper, also published in April. Leann Tilly and co-workers exposed infected red blood cells to short pulses of dihydroartemisinin to mimic its very short half-life of 1-2 hours in vivo. They performed a kinetic analysis of the activity of dihydroartemisinin against different red blood cell stages of P. falciparum wild type and K13 mutants and, in addition to observing growth retardation, they also detected accumulation of ubiquitinated proteins in susceptible parasites whereas resistant parasites had lower levels. They inferred the involvement of the cellular stress response pathway resulting in destruction of ubiquitinated protein via the proteasome (protein complexes that degrade unwanted and damaged proteins) and suggested resistant parasites are more likely to defend themselves against this damage, delaying the onset of death. 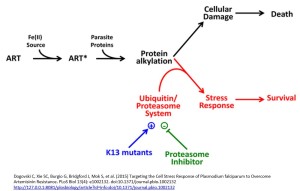 They recommend that further work be undertaken to explore the use of proteasome inhibitors in combination with ARTs for the treatment of resistant parasites. In addition, their kinetics studies lead them to recommend the extension of the current course of artemisinin combined therapy treatment for resistant infections as this would affect the most sensitive stages of the next wave of blood stage parasites; the progeny of those that survived initial exposure.

Taken together these two papers provide new insights into a mechanism underlying the alarming development of resistance to ARTs. The model linking observations of the involvement of a mutation in the Kelch protein and PfPI3K in resistant parasites indicates a greater ability to cope with cellular stress. This ties in with the focus on the proteasome by the Tilly group. Although other pathways may also have developed in resistant strains it is to be hoped that these advances will hasten the development of a new approach to combating resistance to  ARTs, as containment of drug resistant parasites to the countries where it initially developed appears to be failing.

Just wanted to thank you for the great ideas. As of yet I do not have a blog, however that said, I now have many options.