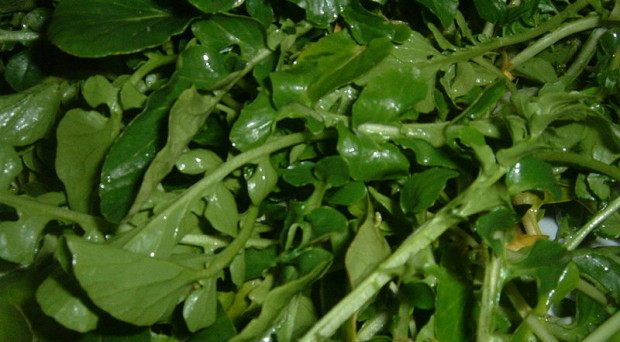 Preparing raw vegetables while making dinner last week led to an exasperated “why are you washing those?” from my significant other and a healthy discussion about whether they should, or should not be washed. From my perspective all sorts of bugs can be found both in and on food, but this conversation led me to wonder: how important is it to wash (and thoroughly cook) our food?

Contamination of food with either bacteria, viruses or parasites can cause illness, regardless of where you live in the world. For instance, bacteria such as Salmonella, Campylobacter and Escherichia coli are a common cause of food poisoning. People living in developed nations are lucky to have unlimited access to clean water and the food they eat has been, for the most part, handled safely and screened to ensure that it will not cause illness. This is less so in developing countries, where water is frequently contaminated with animal and human waste- especially where both live in close proximity, and the practise of using night soil to fertilise crops is common. These risk factors increase the likelihood of ingesting pathogens including bacteria, viruses and parasites, all of which can be found in the raw human waste used to cultivate crops.

A variety of intestinal helminths, commonly referred to as ‘worms’ can be transmitted through a variety of routes including directly through the skin from contaminated soil or water, direct human to human contact or ingestion of contaminated food, water or even soil (a practise known as “pica”). Infection by ingestion of contaminated foods can arise through eating undercooked meat, fish, crustaceans and molluscs, eating raw/undercooked aquatic plants or consuming raw vegetables that have been contaminated by faeces (human or otherwise) due to unsanitary practices by farmers, food workers or manufacturing facilities.

There are three types of parasitic worms, or helminths. These are trematodes (flukes or flatworms), cestodes (tapeworms) and nematodes (roundworms). Infections with helminths (particularly light infections) can often result in no overt symptoms, however symptomatic individuals may experience abdominal pain, diarrhoea and weight loss. Depending on the species of worm, worm burden and progression of the disease, infected people may also display a variety of other symptoms.

In 2010, an estimated 1.3 billion people were thought to be infected with at least one soil transmitted helminth (STH) across 210 countries in the tropics and sub-tropics. While worm infections in developed countries are relatively uncommon, the incidence in developing countries is far higher. 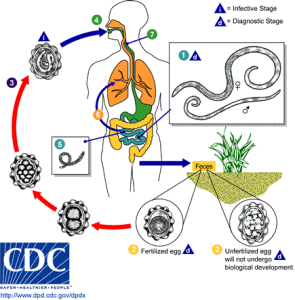 The largest intestinal parasite is the roundworm, Ascaris lumbricoides. Infection with this parasite occurs through the ingestion of eggs which hatch in the small intestine. The newly hatched larvae penetrate the gut wall and enter the blood stream. They ultimately end up in the lungs where they are then coughed up and swallowed before reaching the small intestine where they mature. Mature females produce eggs which are released in the faeces, to continue the lifecycle. Ascaris infections are commonly found in tropical and subtropical regions with warm moist climates, with 807- 1221 million Ascaris infections are reported worldwide.

Humans can become infected with various species of tapeworm by consuming undercooked contaminated pork, beef and fish, the most common perpetrators being Taenia solium, Taenia saginata and Diphyllobothrium latum respectively. Fortunately, tapeworms are rarely acquired in developed countries nowadays due to robust inspection of animals entering the human food chain and laws on feeding practices.

One of the aims of the UK Food Standards Agency is to ensure that both imported and domestic food is safe to eat, with clear guidelines to assess animals that may enter the food chain. It seems likely that with increasing international travel, people from non-endemic areas with good sanitation practises may become infected with some of these species. As such, it is always worth checking meat is thoroughly cooked and that fruits and vegetables are peeled, washed and/or cooked before consumption.

Improving access to clean water in developing countries is key to achieving Millennium Development Goal 7,  as is promoting behavioural changes to interrupt the transmission of numerous pathogens. In China, significant investment is being made to reduce the burden of STH amongst the population through the implementation of a health education package to promote changes in behaviour based on an increased understanding of parasitic disease. A cluster randomised controlled trial has already seen the beneficial effects of such education schemes there with a 50% efficacy observed in preventing STH infections.

Fortunately, there are available treatments for parasitic infection and efforts should continue to make these widely available to those in the countries that need them. Undoubtedly, improvement of infrastructure in these countries is of paramount importance to help achieve a reduction in helminthic infections. Finally, good hand hygiene regardless of where you live is essential when preparing and eating food. Washing your hands, washing vegetables and cooking all food thoroughly greatly reduces the risk of infecting yourself with dangerous bacterial, viral and parasitic pathogens.

During her BSc (Hons) in Biology at the University of York, Hayley spent a year studying in Germany at the University of Bayreuth, Bavaria. Having gained her PhD at the Medical Research Council in the Mammalian Genetics Unit, Oxford she is currently a post-doc researcher at the Liverpool School of Tropical Medicine. Her focus is in the discovery and development of anti-Wolbachia drugs for the treatment of filarial diseases, as part of the A-WOL Consortium in the Department of Parasitology.