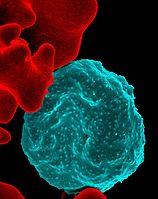 Over 1,300 cases of imported malaria have been reported in the UK annually for the past 10 years.  A few of these unfortunate travellers have recently contributed blood samples that may have long term beneficial consequences for future research into many aspects of the biology of the malaria parasite, Plasmodium falciparum. This is because Colin Sutherland and his team, based at the London School of Tropical Medicine and Hygiene, have established continuous cultures of seven new isolates, all of African origin, from these samples.

Most of the estimated 660,000 deaths caused by malaria in 2010 occurred due to P. falciparum infections, especially in infants living in sub-Saharan Africa. Surprisingly, this figure is good news as it represents a 33% fall in mortality rates in Africa since 2000. However, the history of malaria control is one of optimism followed by setback and concerns are being raised that the advances gained by the deployment of insecticide treated bednets, together with treatment success provided by the use of combined drug therapy, may be short lived.

The combination of an artemisinin derivative and a longer-lasting drug is currently the first line treatment for falciparum malaria recommended by WHO; but resistance to artemisinin is reported to be spreading. Drug failure takes the form of a delayed clearance phenotype, where ring stages of the parasite remain dormant. This has led to some debate concerning the term resistance, as used in this context 1-3, but regardless of the terminology used, a greater understanding of this new phenotype is urgently needed.

Much of our knowledge of the biology of the red blood cell stages of falciparum malaria, including investigation of drug resistance, has been facilitated by the ability to culture P. falciparum in vitro. The culture systems in common usage are based on that reported by Trager and Jensen in 19764 and most clones grown in laboratories worldwide today were established in the 1980s and have thus been laboratory adapted for decades. Their usefulness in shedding light on current questions, such as determination of markers for the presence of resistance to artemisinin derivatives, may thus be limited. Furthermore, despite the fact that most clinical cases of malaria occur on the African continent, the majority of these cultures either originated from isolates whose source was Asia, or are one of the two widely used clones (NF 54 and a derivative, 3D7) that were isolated in the Netherlands and are of unknown geographical origin. By contrast, Sutherland’s new cultures were of West or East African origin. Finally, for those interested in sexual stages or mosquito infections, many of the clones in current usage are not reliable producers of infective gametocytes.

The establishment of culture-adapted clones of falciparum malaria parasites from newly collected isolates is challenging thus the success of the Sutherland team is to be applauded. This achievement may be attributable to their decision to alter the growth medium after the first isolate was cultured. Six of the seven isolates were adapted for culture using a medium in which the percentage of human serum was reduced and the complete culture medium supplemented with a serum substitute, Albumax II, as is currently recommended.

Of particular interest to those researchers working on the sexual stages of malaria is the news that one isolate readily produced gametocytes when the parasitaemia was increased beyond 2%.

All seven stabilates are available at the European Malaria Reagent Repository as an open resource.

The medical and travel history of the seven donors is reported in this article. Bearing in mind the brief time that the majority of the patients spent in an endemic area, it is interesting to note that all isolates were polyclonal. Nested PCR analysis determined that all but one isolate consisted of four to six clones. The authors point out that polyclonality (the presence of several clones within one individual) may result from a single inoculation of the infectious (sporozoite) stage as a mosquito may be infected with several different clones. This emphasises the complexity of African isolates and could complicate treatment regimes if, for instance, one of the clones has a different growth pattern or is drug resistant.

Cultures were used to screen the isolates for response to a variety of drugs. Sensitivity to a panel of anti-malarials was reported, as were the haplotypes of markers for drug resistance. Five of the seven isolated were sensitive to chloroquine and a varied response was recorded when challenged with lumefantrine, which was used in patient treatment in combination with artemether. Artemisinin resistance typified by a delayed clearance phenotype has not yet been reported in Africa and all the isolates were sensitive to the endoperoxides dihydroartimisinin and OZ277.

Hopefully, these newly established isolates will prove of value to the malaria community and this report will pave the way for the establishment of further isolates in culture.