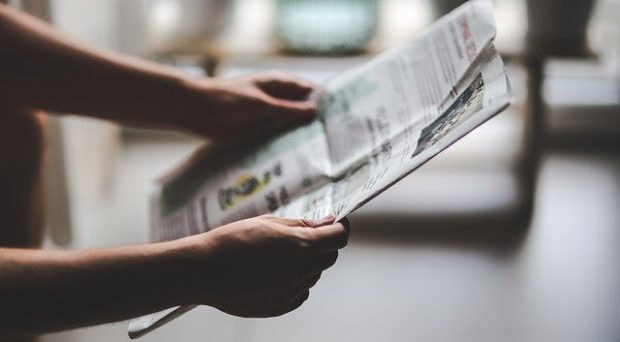 What is food insecurity?

Food insecurity can be defined as “the inability to consume an adequate quality or sufficient quantity of food in socially acceptable ways, or the uncertainty that one will be able to do so”. As well as hunger, this definition captures the dimensions of food insecurity (or food poverty) that are sometimes overlooked: stability, agency and sustainability. Can people always access food? Can they do so in a way that’s free of shame and stigma? Will the current food system work for us all in the long-term?

Food insecurity presents a large and growing problem in the UK. We estimated that 24% of UK adults were experiencing food insecurity in 2017 – resorting to food banks among other coping mechanisms to feed their families. Our study aimed to understand the ways in which newspapers covered the topic of food insecurity – how the problem and drivers were framed. This provides insight on the attitudes towards the problem, the potential solutions and their acceptability among different stakeholders.

The picture our work painted was a nuanced one, where many societal, political and economic factors were portrayed as contributing to the growing problem of food insecurity. At the heart of it, people did not have enough money to meet their needs. The reasons often cited for this were: low wages, insecure jobs, unemployment and high cost of living.

But further upstream, we saw more contention. Charities and advocacy groups highlighted the structural barriers to people meeting their living costs – austerity, funding cuts, policies that exacerbate social inequalities. The roll-out of the Universal Credit social security system (introduced to replace several means-tested benefits) was also considered a major contributor to the problem, especially the long wait (of at least 5 weeks) when switching from the old system to Universal Credit. 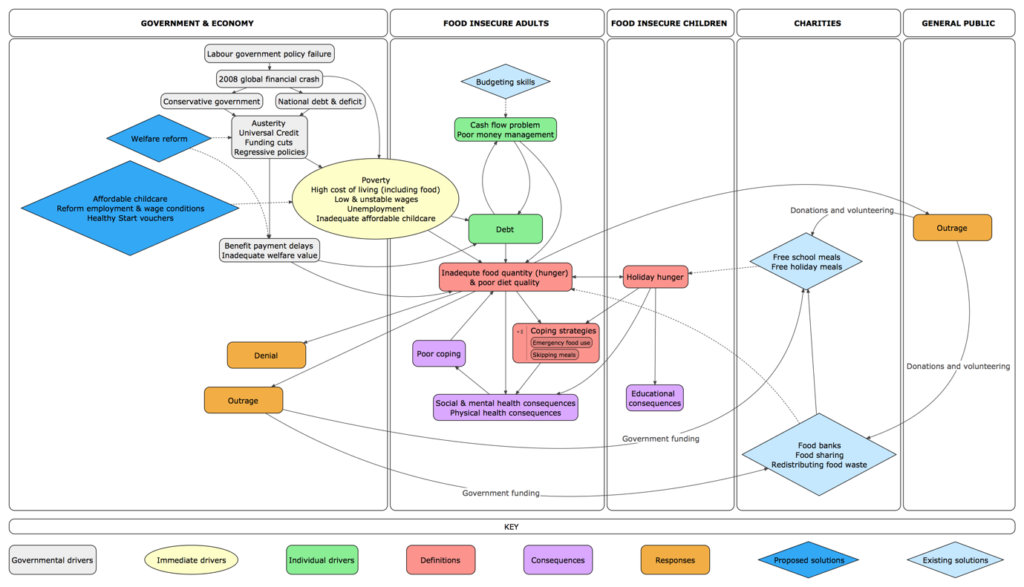 Our work highlights a disconnect between the problem and the solutions. The problem was presented as systemic, whilst the solutions were heavily reliant on charity – solutions that, at best, provide short-term relief for families experiencing hunger, unhealthy diets and the social consequences of food insecurity.

The issue of ‘holiday hunger’ (hunger experienced by children during the school holidays, often because they are no longer receiving free school meals) has brought more attention onto the problem. This has resulted in some political action, e.g. the Children’s Future Food Inquiry and the House of Lord’s Select Committee Inquiry on Food, Poverty, Health, and Environment.

A debate surrounding food vouchers for children who usually receive free school meals at the start of the COVID-19 pandemic was played out in the media. Campaigners pressured the government to provide food vouchers to low-income families throughout the summer. Their success in reversing the government’s decision to not provide support during the summer holidays shows news media to be a powerful tool for advocacy.

As we emerge from the COVID-19 pandemic, many of the economic factors contributing to food insecurity will have worsened. Urgent action must be taken to protect families from food insecurity, with a focus on solutions that address the upstream drivers rather than relying on food banks and other forms of charitable food aid. 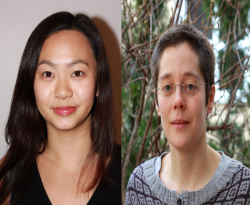 Amy Yau completed her PhD at the MRC Epidemiology Unit, University of Cambridge, for which this work formed part of. She is currently a Research Fellow at the London School of Hygiene and Tropical Medicine. Her work focuses on the social and environmental determinants of diet.

Jean Adams is a University Senior Lecturer and Programme Leader in the Population Health Interventions programme at the MRC Epidemiology Unit. Her research focuses on population-level influences on, and interventions to improve, dietary public health