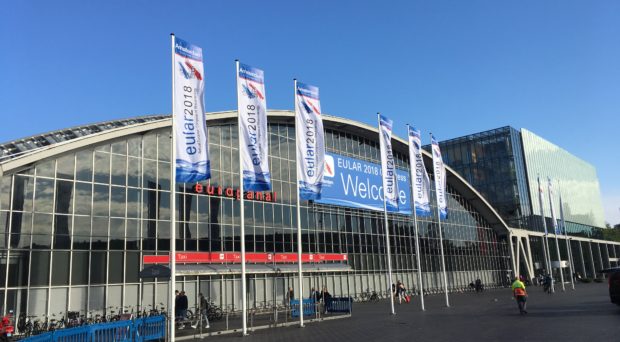 Descending upon the RAI Amsterdam conference center, scientists, rheumatologists, patients and health professionals met to discuss the recent advances in research and patient care in the treatment of rheumatic and musculoskeletal disorders (RMDs). Although there is considerable focus on research into rheumatoid arthritis, the whole spectrum of RMDs are covered throughout the congress, along with the increasing number of comorbidities that are seen with RMDs. The schedule was packed with 175 different sessions encompassing 560 speakers along with 32 industry supported scientific symposia plus over 2000 posters. Too much great research to mention in full, so here are some of highlights. 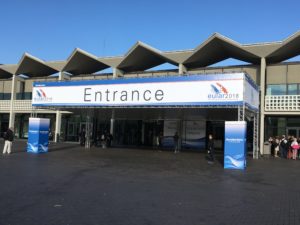 Following on from the opening plenary session was the plenary abstract session containing eight presentations from the most highly ranked abstracts submitted to the meeting as chosen by the scientific program committee; a selection of these abstracts are below. Findings presented by Daniel Solomon (Harvard Medical School) indicated that canakinumab, a monoclonal antibody targeted at IL-1b and licensed for the treatment of several rare auto-inflammatory disorders, reduced the risk of flares of gout by more than half compared with placebo in atherosclerosis patients recruited to the CANTOS trial, despite having no effect on serum urate levels. Interestingly, serum urate was suggested to be a risk marker for both cardiovascular events and gout. Pomme Poppelaars (VU University Medical Centre, Amsterdam) described the results of a 23 year follow-up study from the COBRA trial cohort, the findings of which suggested that early intensive therapy of rheumatoid arthritis has long-term benefits and may normalize mortality rates. Graeme Jones (Menzies Institute for Medical Research) presented the findings of a multicenter randomized double blind placebo controlled trial investigating the effect of infusion of zoledronic acid in knee osteoarthritis patients over two years. Although zoledronic acid did not result in any improvement in knee pain and bone marrow lesions, the authors found that it might relieve symptoms in patients with mild osteoarthritis.

RMDs and their comorbidities

It has become clear over the last few years that patients with RMDs are also at an increased risk of developing a variety of comorbid conditions, ranging from cardiovascular disease and malignancies through to depression and anemia. This increase in interest in cormorbid conditions was also reflected in the number of abstracts presented at the meeting focusing on this area of research and a couple of these are highlighted. Using data from the Scottish Early Rheumatoid Arthritis cohort of patients with newly diagnosed rheumatoid arthritis, George Fragoulis and colleagues (University of Glasgow) confirmed that depression and anxiety were significant comorbidities at the time of the diagnosis of disease, and interestingly indicated that depression was associated with the inflammatory marker C-reactive protein in this cohort. A similar association between the onset of depressive symptoms and disease severity in patients with radiographic knee osteoarthritis was presented by Alan Rathbun (University of Maryland), who went on to indicate that physical performance and structural severity were the main contributors to symptom onset. 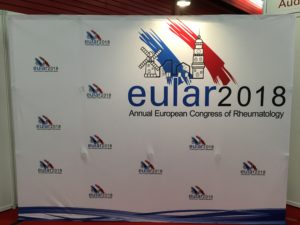 Identifying those changes that occur during the early stages of disease and before disease onset was another popular topic at the meeting, as such studies are potentially important for the development of early interventions that can prevent the progression of the disease in at-risk individuals. Two studies presented at the meeting were highlighted as of particular interest in this regard. A study by Lisa van Baarsen and colleagues (Academic Medical Centre, Amsterdam) identified molecular changes in gene transcripts in synovial tissue taken from subjects at risk of rheumatoid arthritis but before the onset of the disease and these were associated with the subsequent development of the disease. These ‘gene signatures’ were characterized further to identify specific genes up- and down-regulated at an early stage in the disease process and may enable a better understanding of the pathophysiology of early disease and the identification of potential drug targets. Another study from separate researchers at the Academic Medical Centre identified that BCR clones in peripheral blood could be a potential biomarker and predict the imminent onset of rheumatoid arthritis in a cohort of at risk individuals. In a separate session, Peter Lipsky (RILITE Research Institute) provided an overview of how ‘big data’ and bioinformatic analysis of gene expression profiles can be, and is being, used to generate insights into the mechanisms underlying RMDs, with a focus on current studies that are being undertaken in lupus. This was a fascinating insight from a world-leader in the field into how large datasets can be analysed by computational analysis to determine potential disease pathways. 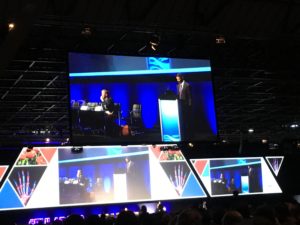 One of the highlights of the EULAR congress each year and very popular among the delegates is the ‘WIN (What is New) and HOT (How to Treat)’ sessions, and this year was no exception. A wide variety of topics were covered, including lupus, vaculitis, systemic sclerosis, spondylarthritis and rheumatoid arthritis, and were delivered by experts in the respective fields. One to note was the presentation by Hector Chinoy (University of Manchester and an Associate Editor of BMC Rheumatology), who provided a clear and concise overview of the upcoming treatments for myositis and how advances in the understanding of the disease over the last decade are now having an impact on clinical practice.

Within the scientific program, space was also given to a series of sessions for ‘Young Rheumatologists’, which was supported by members of EMEUNET (Emerging EUlar NETwork), the EULAR working group for young clinicians and researchers in rheumatology. These sessions were a mixture of practical (and entertaining) talks covering topics such as basic statistics and understanding the language of basic research, epidemiology and health services research articles, as well as the challenges of being a trainee in a clinical environment. Each of these sessions also offered the opportunity for a number of young researchers/rheumatologists to present their data.

With Amsterdam saying goodbye to EULAR2018, the congress returns to Madrid in June 2019 and BMC Rheumatology is looking forward to seeing the progress that has been made in research into RMDs over the coming year.

Senior Editor at BMC
James is the Editor of a portfolio of six of the medical journals within the BMC Series, including BMC Musculoskeletal Disorders, BMC Rheumatology, BMC Cardiovascular Disorders, BMC Endocrine Disorders, BMC Obesity, and BMC Sports Science, Medicine and Rehabilitation. He undertook his postgraduate research in physiology at the Babraham Institute, Cambridge, obtaining his PhD from the University of Cambridge. After working as a postdoctoral researcher at Kings College London, he moved into a career in scientific publishing and worked at Portland Press/Biochemical Society before joining the BMC Series in June 2015.