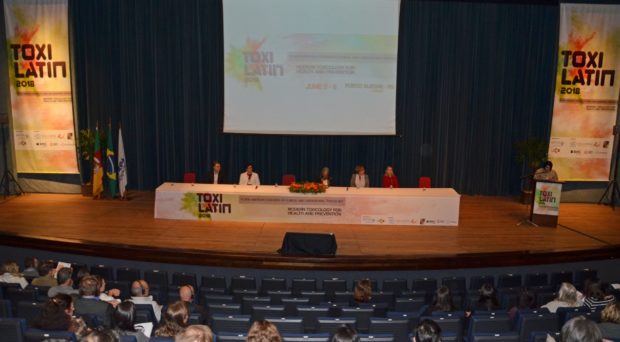 This year, ToxiLatin was held at the Universidade Federal do Grande do Sul campus in Porto Alegre, Brazil.  Parallel talks in English and Portuguese were given on the toxic effects of heavy metals, nanomaterials, and pesticides. ToxiLatin aims to disseminate scientific knowledge to everyone in spite of academic wealth, a goal in which they share with BMC, with the ultimate goal to decrease noncommunicable diseases and reduce the socioeconomic disparities of these diseases.

At the beginning of the conference, the brilliant and charismatic organizer of the conference, Solange Cristina Garcia (Professor of Toxicology at the Federal university of Rio Grande do Sul, Brazil), gave a pointed and poignant introduction about ToxiLatin and toxicology research in Brazil, a country of over 207 million people.

In this opening address she discussed the 2014 founding of AstoxiLatin (Latin American Association of Environmental, Experimental and Nanomaterial Toxicology). The formation of this society was motivated, mainly, due to the lack of policy and availability of antidotes for cyanide exposure in people affected by the tragic Kiss nightclub fire in Santa Maria, Brazil.

In Dr. Garcia’s address she discussed the political, social, and financial challenges facing the fifth most populated country in the world as well as the significant cuts in scientific research.

Nanomaterials and their toxic potentials received a significant amount of attention at ToxiLatin this year. Nanomaterials include substances such as polymers, metals, carbon nanotubes, and silicas and are omnipresent. They can be found in body lotions, shampoos, toothpaste, paint, antiperspirants, sunscreen and many other substances humans constantly encounter and dispose of.

Measuring nanomaterial levels is critical since exposure can have negative health consequences. Nanoparticles are unstable structures and have immunotoxic potential. Exposure to nanoparticles activates the immune system, and has been shown to cause release of cytokines including IL-1β.

In this roundtable, which was particularly important for students, we discussed the importance of journal selection, intriguing titles, strong hypotheses and abstracts, and journal formats.  We had an honest discussion of predatory journals, the current state of the challenges in finding reviewers, and dealing with reviewers’ split decisions.

One critical topic discussed was the conflict researchers in financially starved scientific communities, such as Brazil, experience when deciding to publish in an open access journal or to buy necessary experimental compounds.

One critical topic discussed was the conflict researchers in financially starved scientific communities, such as Brazil, experience when deciding to publish in an open access journal or to buy necessary experimental compounds. Of importance, I stated that when publishing in BMC, finances should not be a prohibitive factor in publishing in our journals.

This year ToxiLatin and BMC Pharmacology and Toxicology have teamed up to publish a supplement of articles related to the conference.  Attendees were encouraged to submit extended abstracts and, after careful vetting and BMC’s standard rigorous peer-review process, an exciting collection of toxicology-related articles will be published at the end of the 2018.

This year’s ToxiLatin was incredibly successful, and its promise of furthering the field of toxicology will continue at the next conference in Rio de Janeiro, Brazil in 2020.

Editor at BMC
Ben is an Editor for the BMC-series for BMC Psychiatry, BMC Psycholoogy, BMC Pharmacology and Toxicology, BMC Neuroscience, and BMC Neurology.
Before joining BioMed Central, he received his PhD in psychology at University of California at Davis, which was followed by a post-doctoral position at New York University Langone Medical Center and a second post-doctoral position at New York University. Ben’s focus on biological psychology has involved studies on the neurobiology of monogamy and pharmacological treatments for posttraumatic stress disorder.