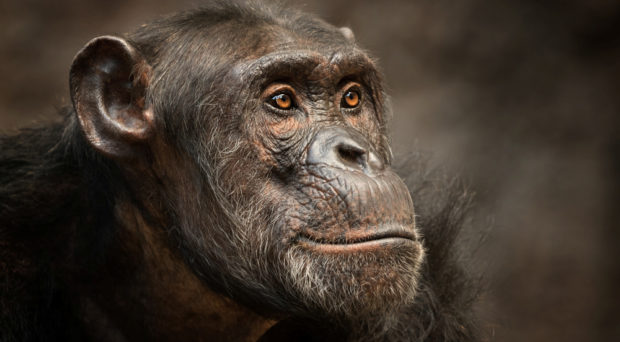 The authors ran standard and error-tolerant searches of the proteomes of modern human samples against those of chimpanzees and Sumatran orang-utan.
© Andyworks / Getty Images / iStock

Palaeoproteomics is the new-kid-on-the-block in archaeological science and evolutionary biology. Standards of practice have only recently been set out for this burgeoning field of investigation, used recently to study ancient humans, animals, and even dinosaurs (though this is somewhat disputed).

Single amino acid polymorphisms (SAPs), areas in the proteome where one amino acid (AA) difference occurs, are useful to determine evolutionary differences between clades, including late Pleistocene hominins like Neanderthals and Denisovans.

Error-tolerant searches (wherein the algorithm can ‘learn’ when examples received have been corrupted in some way) correctly inferred SAPs in Collagen Type 1 of modern and Pleistocene samples, but as Dr Welker notes, this “needs to be demonstrated [in a whole proteome] before moving on to the analysis of older and possibly more divergent hominin fossils”. This is the basis of the experiments reported in his recently-published paper in BMC Evolutionary Biology.

As you go further back in time on the evolutionary tree, larger proteomic sequence differences occur between your target species and their more-distant relatives.

Until now, the cross-species proteomics effect (CSPE) problem hadn’t been demonstrated to be overcome by error-tolerant searches – essential for confidence in palaeoproteomic investigations.

The CSPE problem derives from using a different reference proteome from your target population or species. As you go further back in time on the evolutionary tree, larger proteomic sequence differences occur between your target species and their more-distant relatives.

The larger the number of sequence differences, the more likely that peptides and proteins will not be identified in standard (non-error-tolerant) searches. The small proteome databases available for hominin species compound the effect.

For a protein to be confirmed, at least two unique peptide spectrum matches (PSMs) with a FDR (false discovery rate) of 1% had to be identified when searching the modern samples against the Homo s. database in the general search. In error-tolerant searches, PSMs were accepted only when a peptide of 10 amino acids (AAs) or longer was matched in the Homo s. database.

This could be problematic when comparing human proteomes with much older hominin ancestors – larger evolutionary distances may make it difficult to reliably reconstruct phylogenetic trees.

Welker recommends creating shorter peptides in palaeoproteomic studies, and searching against databases of species with less evolutionary distance, though the latter may more difficult with more ancient hominins.

Error-tolerant searches minimised the CSPE problem between moderately divergent proteomes (e.g. the human-chimpanzee split), and this should be kept in mind for future phylogenetic analysis of ancient hominin proteomes.

Filling in the map

While there are limitations to error-tolerant searches in palaeoproteomic studies, Frido Welker has established filtering criteria and recommended experimental techniques to help maximise the potential for whole proteome investigations. Moreover, he has identified two potentially invaluable proteins for evolutionary studies.

Palaeoproteomics is a new field of study, with much of its potential and limitations still to be explored. Dr Welker’s paper has filled in a portion of the map of this largely-uncharted territory.

Assistant Editor, BMC Public Health at BioMed Central
Victoria is an Assistant Editor for the BMC Public Health journal. She completed an MSc in Genetics of Human Disease at UCL following a BSc in Archaeology at the University of York. She joined BioMed Central in 2017 after having worked as an archaeologist and as a laboratory research assistant.