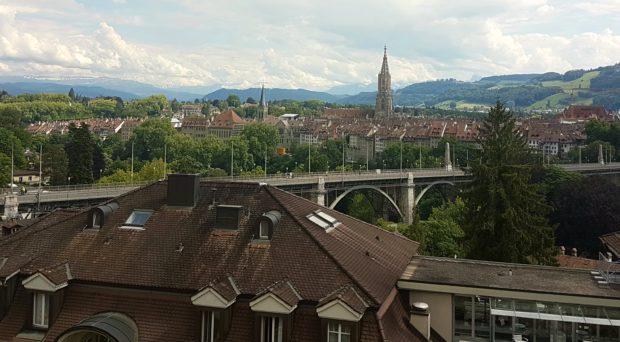 More than 2500 Palliative Care researchers and clinicians traveled to the UNESCO World Heritage Site Bern to attend EAPC2018. With a stunning view of the Swiss Alps, the congress commenced with a musical interlude by members of the youthful local string ensemble CELLOBASS, followed by a welcome from the President of the Swiss Science Foundation, and the Mayor of the City of Bern.

This year’s congress was marked by a double celebration, namely the 30th anniversary of the European Association for Palliative Care, as well as the commemoration of the 100th birthday of Dame Cicely Saunders, widely regarded as the founder of palliative care as we know it today.

Cicely trained as a nurse, social worker and physician, dedicating her work to pain and symptom relief through holistic care that not only addresses the physical needs of patients, but also meets the social, psychosocial and spiritual needs of patients, family and carers. She was involved in the foundation and running of the world’s first purpose-build hospice St. Christopher’s Hospice in London, as well as the Cicely Saunders Institute, a charitable organisation which promotes research to improve care and treatment for all patients with progressive illnesses.

The conference was broadly divided into three major topics: cancer and palliative care, public health and policy, and ageing and palliative care. Furthermore, the first day saw a special Swiss session, which discussed controversial topics such as the wish to die and hastening of death, voluntary stopping of eating and drinking, and continuous deep sedation, as well as topics on palliative care services in Switzerland and beyond.

The term palliative care has become an unspeakable metaphor for one’s own death.

The latter topic was addressed in two talks by the winner of this year’s Clinical Impact Award Thomas LeBlanc MD, who discussed his own work on integrating palliative care in the clinical treatment of patients suffering from haemato-oncological diseases. His slip of the tongue “Palliative Scare” was an unintended example of how the service is often feared by medical professionals and patients as an end-of-the-line treatment. This thought was also emphasized by Early Researcher Award winner Anna Collins, who stated that the term palliative care has become an unspeakable metaphor for one’s own death, and discussed the communication between patients and doctors about death, dying and the introduction of palliative care.

These and other discussions at EAPC2018 indicated that integrating palliative care in the treatment of terminal (cancer) patients at an earlier stage helps relieve unaddressed symptoms, lessens psychosocial distress, and improves overall quality of life and death.

Palliative care for the many and the few

Several talks at EAPC2018 addressed the specialist palliative care needs and requirements for minority groups. The variety in minority groups resulted in diverse topics discussing different aspects and needs of palliative care, including the spiritual needs of religious people in secular countries, and the cultural and linguistic barriers between carers and patients of different ethnicity.

Children form another minority group in palliative care, and their specialized needs can sometimes be overlooked by palliative care researchers and carers. In an excellent talk by Post Doctoral Award winner Lorna Fraser, various data sets were linked to provide a better insight in the access to palliative care for children and young adults with progressive or terminal disease.

My personal favorite was an insightful talk by Mary Turner on palliative care for dying prisoners, and in particular the difficulties faced by prison officers responsible for their care. The shortage of palliative carers in UK prisons means that most palliative support is provided by prison officers who are not trained to deal with the psychological aftermath of caring for the terminally ill. Furthermore, the facilities in UK prisons often do not allow for the installments of hospital beds, wheelchairs may not fit through doors, and palliative care resources are lacking. The lack of time, resources, and training relating to palliative care for dying inmates contributes to the general stress and job-related ill health of prison officers across the UK, and a poor quality of life for dying inmates. An open meeting to discuss a taskforce for care provision for prisoners in Europe was also part of the EAPC2018 program.

EAPC2018 was a very interesting conference that covered a wide range of thought-provoking, and sometimes controversial topics, and I would certainly recommend this congress to anyone with interest in the field. I would like to congratulate BMC Palliative Care Associate Editor Shane Sinclair for receiving the Paper of the Year Award, and I would like to commend the organisers for handing out sturdy, reusable plastic cups, which greatly reduced the amount of plastic waste that I have experienced at other conferences. I am certainly looking forward to the 11th World Research Congress of the EAPC in Palermo, Italy!

Maria joined BioMed Central in October 2017, following the completion of her PhD, completed a PhD at the University of East Anglia, Norwich. Her research involved the structural and functional investigation of periplasmic chaperones in Salmonella. Since joining the editorial team, Maria has taken on the role of Editor for BMC Health Services Research, BMC Nutrition, BMC Palliative Care, and BMC Paediatrics.