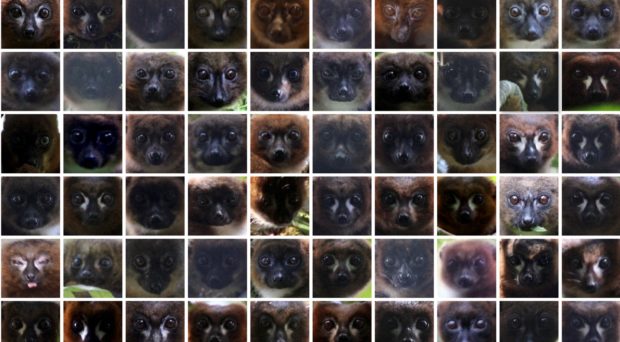 Picking a face out of a crowd

As our closest relatives, primates have long been a focus of research into their behavior and evolution. As many primate species become threatened with extinction, research on wild populations has become even more important, being crucial to conservation efforts.

Long-term studies, following primate social groups over many years, can be especially informative. However, a key requirement for such studies is to consistently and accurately identify different individuals: not always an easy task.

The traditional way of identifying individuals is to capture them and attach a tag or collar. This has proven to be an effective technique on a number of successful long-term field studies. However it also comes with drawbacks. Capturing animals can be hard enough with birds or small mammals like rodents; for large primates, it usually involves darting them with a blow-gun or air rifle.

This is both expensive and time-consuming, limiting the number of individuals that can be tagged. Of even greater concern, the act of capture itself can be harmful to the animals, whether through damage caused during capture (anything from stress to broken bones), or by disrupting group dynamics.

An alternative to capturing and tagging is to identify individuals via natural variation in their features, such as scars or skin patterns. This does, however, require considerable skill on the part of observers. Even with extensive training, it is still inevitable that errors will occur in identification both within and between observers.

What is really needed is a non-invasive identification method that relies less on human perception. The developing field of animal biometrics offers a potential solution, with automated recognition systems showing promise in a number of mammal species. New research, published today in BMC Zoology, describes the development of such an automated facial recognition system for lemurs: LemurFaceID.

The study is the result of collaboration between a number of US-based scientists, led by lemur researchers Rachel Jacobs and Stacy Tecot and biometrics researchers David Crouse and Anil Jain.

Their work takes advantage of a well-studied population of red-bellied lemurs. Like all lemurs, the red-bellied lemur is found only on the island of Madagascar. The study population, living in Ranomafana National Park, has been the subject of multiple research projects since the 1980s.

In all, the researchers had access to 462 images of 80 red-bellied lemur individuals. LemurFaceID requires a researcher to manually locate the eyes in the picture, the critical aspect of this recognition system, as with most human facial recognition systems. Various other alterations are then made to the image (see below for a basic outline of the process) before LemurFaceID automatically compares and matches it to the database of known individuals.

The results show that LemurFaceID has a relatively high level of accuracy (98.7%) in ‘closed set’ mode – i.e. when only tested with pictures of known individuals already included in its database. Accuracy was lower in an ‘open-set’ mode when it was tested with pictures of lemurs not already included in the database. This suggests that, for now, LemurFaceID would be most useful for captive or well-studied wild populations (like this one) where all individuals are known.

However, the researchers are confident that the system can be further improved by the addition of larger datasets of photos and individuals, along with further field testing, eventually improving its ability to distinguish between known and novel individuals.

The ultimate goal of the project is to provide a non-invasive method to recognise lemurs that does not require extensive training. The potential benefits of such a system are considerable. By reducing the difficulty and cost of long-term monitoring of wild lemur populations, the scope of such studies could be increased with more and better quality data generated in less time.

This would have considerable benefit for our knowledge of the evolution of this unique primate radiation, endemic to just a single island, and help us learn more about their social systems. It would also enable improved monitoring of lemur population numbers and demographic structures, helping conservationists better model extinction risk; an important consideration when many lemur species (including the red-bellied lemur) are threatened by human encroachments into their habitat. It could even help fight the illegal pet-trade in lemurs taken from the wild, by allowing law enforcement and tourists to rapidly report sightings and determine the origin of captive lemurs.

These methods could also be adapted to other primates or even other large mammal species with variable facial or skin patterns, such as bears, red pandas, or sloths. Already similar automated facial recognition systems have been developed for chimps and guenons. Such systems could even be combined with automated remote camera traps, increasingly used to monitor populations of hard-to-track wildlife.

While the researchers’ caution there is no “one size fits all” approach to automated animal facial recognition, it is clearly a technique that will play an ever larger part in our understanding of, and attempts to preserve, the large mammals of our world.