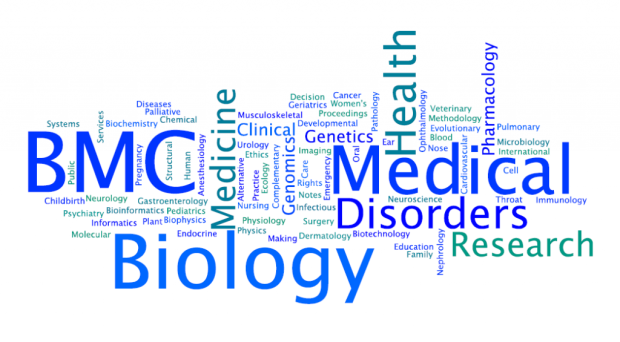 Alzheimer’s disease is a progressive neurodegenerative disease that destroys memory and cognitive function and there are currently very limited treatment options.  This article, published in BMC Systems Biology, describes the development of a mathematical model of Alzheimer’s disease that maps the neurological environment of the diseased brain. The model can be used to explore the efficacy of pharmaceutical agents that may slow the progression of the disease. An example combination therapy is applied, demonstrating how the model can be used to optimise a treatment regimen that could then be tested in a clinical trial.

An 11-year cohort study has revealed that mental attitude and personality traits may affect the likelihood of dying from coronary heart disease (CHD). Participants were surveyed at the start of the study to determine their levels of optimism and pessimism and after 11 years the status of the participants was re-examined, with the number who had died from CHD recorded. It was found that those who had died of CHD were more pessimistic at the start of the study, with the effect seen in both men and women. This study suggests that the level of pessimism could be used as a non-invasive tool, along with the measurement of other known risk factors, for determining the risk of CHD-induced mortality.

Ageing research: Being bilingual can protect against cognitive decline

Cognitive decline in the elderly is a growing problem worldwide as the life expectancy in many countries increases. Understanding how this decline happens and ways to slow or prevent it is therefore of paramount importance. This study, published in BMC Geriatrics, provides evidence that being able to speak more than one language leads to increased mental capacity in older individuals. Participants were Mexican-American immigrants who speak both English and Spanish and represent a more culturally homogeneous group compared with those analysed in previous studies. This allowed the researchers to identify improved performance in cognitive screening tests amongst the bilingual participants compared to their monolingual counterparts. 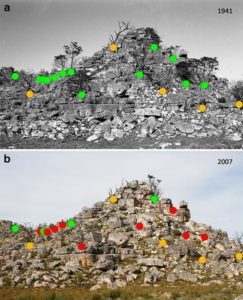 Repeat photography was used to track changes in conifer populations which are disproportionately threatened by global change. In the historical photograph, 13 living trees were identified (green dots) and five skeletons (orange dots). Only four individuals had survived until 2007, with nine having died (red dots) and no new trees recorded (White et al., 2016).

The so called ‘Freshman 15’ refers to the weight gain that many North American students experience during their first year of college. This study, published in BMC Obesity, aimed to shed light on whether British students also experience similar changes in weight at the start of university. The study measured changes in weight amongst around 200 students over their first academic year and found that half of the students were weight gainers, experiencing a mean increase in weight of 3.5 kg by the end of the year. Interestingly, the study also found that 25% of participants lost more than 0.5 kg over the year with a mean weight loss of around 3 kg. This study sheds light on some of the trends that occur in weight changes at British universities with a majority of students undergoing a meaningful weight change in their first year.

Epilepsy is one of the most common neurological disorders, affecting around 65 million people worldwide and is characterised by excessive hyperexcitablility of neurons. The molecular mechanisms underlying the disease are still being uncovered. This review, published in BMC Neuroscience, provides a summary of the role of two regulatory pathways that control the expression of proteins involved in the development of epilepsy; the mTOR and MAPK pathways. Activation of these pathways is linked to increased expression of proteins involved in synaptic transmission, thereby causing the neuronal hyperexcitability characteristic of epilepsy.

Infectious diseases: The epidemiology of a rare fungal disease in children

Mucormycosis is a rare but often fatal invasive fungal disease. An up to date record of the epidemiology of the disease, its clinical characteristics, diagnostic procedures, microbiology, treatment and outcome in children is lacking and so this study aimed to analyse data collected over a ten year period from a range of different countries. The analysis revealed that the majority of children who were diagnosed with Mucormycosis had an underlying health condition and that the most effective treatment regimen was the use of active antifungal agents alongside surgery. This study provides valuable information on the diagnosis and treatment of this rare but devastating fungal disease.

Emma is an Editor at the BMC series. Before joining BioMed Central in 2016 she did her PhD at University College London and postdoctoral research at the University of Wisconsin-Madison.