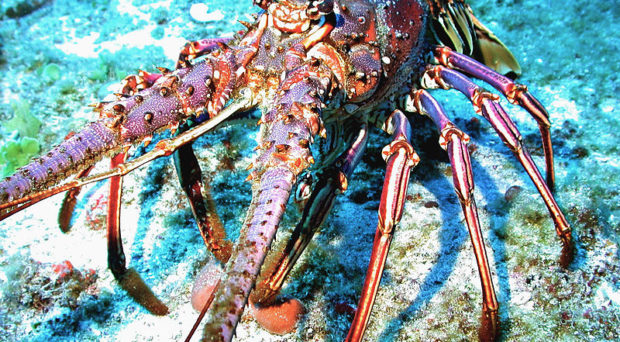 Photo from the National Oceanic and Atmospheric Association (NOAA), via Wikipedia, Public Domain

The Caribbean spiny lobster, Panulirus argus, is one of the largest brooding invertebrates in the Western Atlantic.  Studying this species can help us better understand the parenting and reproductive practices of large marine invertebrates, as this topic is not fully understood. While some groups don’t display any parental care, other groups might care for their offspring into adolescence.

In this species of lobster, the females produce large broods of eggs and carry them below their abdomen until they hatch. This differs greatly from organisms like some fish that simply expel their eggs into the environment where they’re left to develop.

Some benefits that come with brooded eggs include defense against predators and protection from unfavorable environmental conditions. On the other hand, brooding eggs can also negatively affect the lobster’s reproductive performance by decreasing the brood size. This decrease is caused by greater embryo volume, crowding, loss from the abdomen, and accumulation of sediment and small organisms among others.

This team of researchers, led by J. Antonio Baeza at Clemson University, collected Caribbean spiny lobsters from the coral reefs along the Florida Keys, and studied their behaviors in a laboratory setting. From their research, we see that brooding Caribbean spiny lobsters display a number of distinct behaviors while carrying their embryos. These include abdominal flapping, fanning of pleopods (swimming legs), and probing with pereopods (walking legs). While performing these actions, they also display the states of standing and abdominal extension.

The female lobsters tend to perform these behaviors in a specific order: (1) standing up, (2) abdomen extension, (3) abdominal flapping, (4) pleopod fanning back and forth. Steps 3 and 4 are sometimes performed simultaneously, and probing with the pereopods can be observed while the lobster is standing up with their abdomen extended.

In the video below, we can see a pregnant female engaging in abdominal flapping.

What could be the advantages of performing these behaviors? Due to the large embryo masses of P. argus, some behaviors are likely used to provide more oxygen to the brood, while others are used to detect oxygen conditions or foreign materials.

Abdominal flapping and pleopod fanning help ventilate the embryos, which is known to increase oxygen levels at the center and periphery of larger embryo masses. Previous studies in other marine species also suggest it speeds up development of the embryos.

The female lobsters can also identify and remove foreign objects like detritus or parasites, by using their pereopods to “probe” the embryos. This strategy can also be used to detect different compounds in the environment, which can be beneficial to determine if more oxygen is required by the embryos. This form of grooming is associated with increased egg survival and hatching rates.

The emergence of the parasitic Carcinonemertes sp.

Despite the protection provided by probing, this process is not perfect considering the presence of a parasitic worm in the broods of P. argus. These ribbon-like worms are from the genus Carcinonemertes, which includes other species previously reported as marine egg predators. Broods infected with these worms experience numbers of dead embryos and empty embryo capsules, negatively affecting reproductive performance.

While this worm species displayed relatively low prevalence among P. argus in this study, this doesn’t mean they can’t cause extensive harm. If the worm experiences a population outbreak, the population of P. argus could greatly diminish. This, along with other factors, may help explain the recent declines in Caribbean spiny lobster landings in the Caribbean.

Describing the development of parental behaviors

Despite the Caribbean spiny lobster’s large size, it demonstrates the ability to brood offspring without decreasing reproductive performance. Theoretically, larger species should experience higher costs when brooding because of increased egg production and lower brooding space. The Caribbean spiny lobster overrides these costs by engaging in active parental care, fostering more favorable conditions for embryos to survive and develop. In order to better understand how these parental behaviors developed, it would be useful in future to explore the metabolic costs lobsters experience from engaging in active care.

Megan is an Assistant Editor for the BMC Series journals. Before joining BioMed Central in 2016, she graduated from the University of Michigan where she received her Bachelor's Degree in Microbiology.