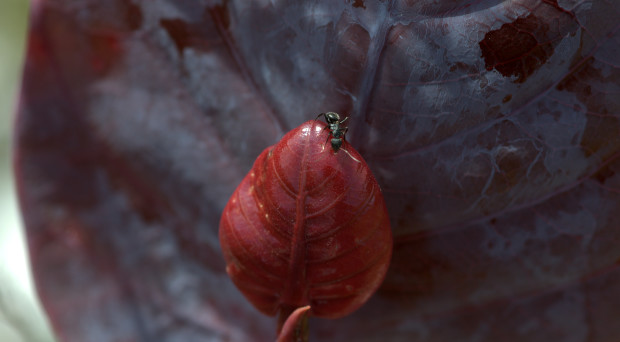 Daniel has a PhD in Biogeography and Community Ecology from Aarhus University, Denmark. Currently, he is working as a postdoc in Brazil where he researches various aspects of species interactions and ecological networks, with a main focus on pollination. So how did he come to capture this fascinating image?

Can you tell us a little bit about where and when this picture was taken?  Was it a challenge to capture the ant like that?

I do my field work in the Campos Rupestres which is an area of montane grassland with an impressive variety of plant species of which many are endemic, meaning they are unique to this location.

The plant in this image, C. cereifera, is a very characteristic plant and if they have young leaves you’re likely to see ants on them. The ant in the image here is a Camponotus (carpenter) ant. Then it’s just a matter of choosing your composition and being patient in order to capture the ant in the right position. I took the photo during one of my first field trips to the area back in 2012.

What about the scene do you find particularly interesting?

So basically we don’t know much about the ecology and evolution of this plant species, and the relationship with the ants still needs to be studied in detail. In general the significance of biotic interactions for the occurrence and distribution of species is something we still know very little about.

I think that the photo tells an interesting story that immediately makes you curious and I’m really happy with that.

This could be essential when we want to help endangered species. The image reminds me of the fact that there are so many interactions out there that we need to understand better, and that nature often surprises us with its ingenuity.

Why did you enter this image in the competition, and how do you feel now that you’ve won a prize?

I like the composition of the photo because you can really see the contrast between the young, vulnerable leaf and the huge, worn adult leaf in the background. Almost like a parent watching over its baby. Except the actual guardian here is the ant.

Also, to me, the image captures a lot of the essence of Campos Rupestres and I think that’s one of the main reasons that I really like the photo. But even for people who are not familiar with the area I think that the photo tells an interesting story that immediately makes you curious and I’m really happy with that.