Among the many strategies that prey species use to avoid being eaten is camouflage. But how is this strategy affected if the prey species exists in different colour morphs and different habitat types? A recent experiment from researchers at Linnaeus University in Sweden and Åbo Akademi University in Finland investigated this very question, using pygmy grasshoppers. Rather than use natural predators the researchers looked a little closer to home for their experimental subjects. Here, BMC Ecology talks to the study’s senior author Professor Anders Forsman about how humans might make useful experimental ”predators” in ecological research:

1.    Could you tell us a little about the study system used in your research?

As an evolutionary ecologist, I’m interested in how different processes generate patterns of biodiversity, both within and among species. I’m particularly intrigued by colour polymorphisms. 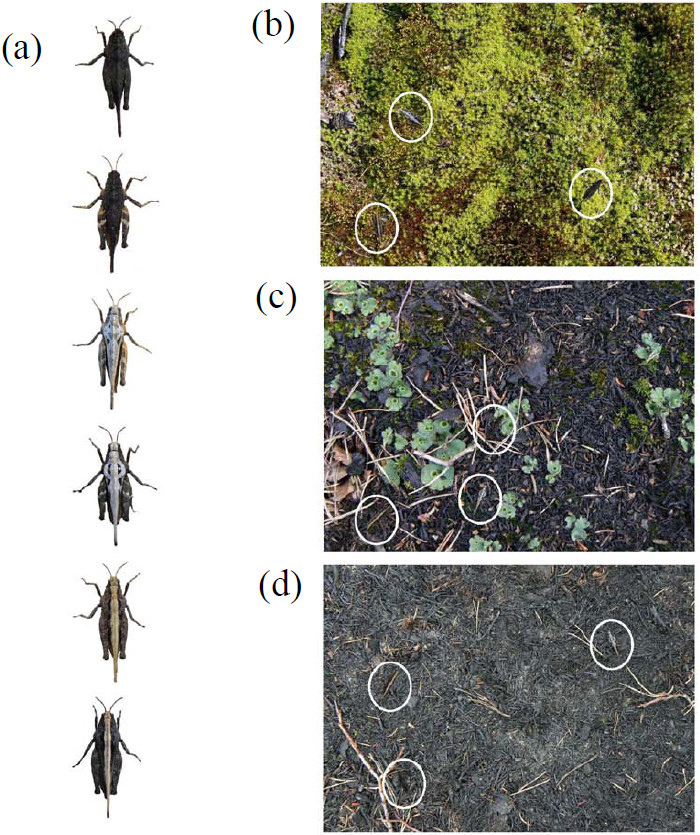 These animals offer a classic example of exuberant colour polymorphism, and were used as study organisms to address questions concerning genetics and selection by Ronald Fisher in the 1930s. In Tetrix subulata, which is the species used for the present study, morphs range in colour from black, via various shades of brown to light grey or almost white. Together with my PhD students and field assistants, I have collected grasshoppers from different areas since 1995. Differences among colour morph frequencies within populations demonstrate rapid evolutionary modifications in response to environmental changes.

For instance, we reported in a recent study (Evolution 2011, 65:2530-2540) that the incidence of the melanistic black form of T. subulata was considerably higher in recently burned areas with sooty backgrounds blackened by fire than in non-burned areas. Furthermore, the black morph declined very rapidly over time in post-fire environments, associated with recovery of vegetation and the gradual disappearance of burned substrates.

Previous studies have shown that colour morphs in T. subulata are genetically influenced and not affected to any important degree by developmental plasticity. It has been confirmed that colour patterns affect the susceptibility of pygmy grasshoppers to predators, but whether the dynamics of the polymorphism in T. subulata can be explained by variation among habitat types in the selective regime imposed by visually oriented predators had not been systematically investigated.

2.    What methods did you use to investigate this?

In this study, we used a computer game approach to estimate and compare rates of detection of different colour morphs, and to examine whether differences in relative protective value among morphs are consistent, or whether they change across habitat types.

Specifically, we presented human ‘predators’ with images of natural black, grey or striped grasshoppers on computer screens against photographic samples of either greenish, intermediate (ca 50% burnt) or completely burnt natural pygmy grasshopper habitats.  Human participants were instructed to search for the grasshopper and to use the mouse to click on it. If a participant clicked on the grasshopper image, the computer program recorded the result as ‘correct’ and presented a new combination of background and grasshopper. If a participant clicked somewhere in the background where there was no grasshopper, or did not click at all within 60 seconds, the program recorded the result as ‘wrong’.

To examine whether this approach generated reliable inferences about predator-prey interactions, selection and evolution in the wild, we therefore compared rates of detection by humans using computer screens with the results of a previous study (J Evol Biol 1999, 12:391-401) in which recapture histories of free-ranging T. subulata individuals were used to obtain independent estimates of both capture rates (by humans) and survival rates for the same three morphs.

We also examined whether rates of detection of the three colour morphs against different visual backgrounds were correlated with the frequencies of these morphs in natural populations. To do this, we used data for 27 samples of more than 4,000 grasshoppers that had been collected from unburned, intermediate and completely burnt habitats.

2.    And what was the main finding to come out of this work?

First, the proportion of grasshoppers that were detected depended on both the colour pattern of the prey and on the type of visual background, and further that no single colour morph offered superior protection against all backgrounds, demonstrating that crypsis is context-specific.

Second, the effect of colour pattern on the relative ease with which humans detected images of motionless grasshoppers in a two-dimensional representation was similar to the effect of colour pattern on the ability of humans to detect and capture free-ranging live grasshoppers in their natural environment. More importantly, rates of detection on computer screens were correlated with independent estimates of survival of striped, black and grey female T. subulata in the wild, thus demonstrating that detection rates by humans may reliably predict selection imposed by natural visual predators, such as birds.

Third, detection rates of grasshopper images were correlated with relative frequencies of striped, black and grey morphs in natural populations that occupied the same habitat types that were used as visual backgrounds in the detection experiment.

In conclusion, these findings implicate visual predation as an important driver of evolutionary modifications of colour polymorphism in pygmy grasshoppers. On a more general note, the study demonstrates, for the first time, that using humans as ‘predators’ in detection experiments can provide reliable information on the protective values of prey colour patterns and of natural selection and microevolution of camouflage in the wild.

3.    Why use humans, and not natural predators, to investigate these questions?

The computer game approach enables the investigator to control and manipulate important aspects of predator-prey encounters, and allows for high levels of replication. For instance, it offers a way to compare how hard it is to detect different types of prey. By presenting prey images against different visual backgrounds, one can also estimate and compare crypsis of alternative colour patterns in contrasting habitat types.

It is possible to test for effects of colour pattern on survival of pygmy grasshoppers in the wild. I did just that in previous study (J Evol Biol 1999, 12:391-401). I captured more than 440 grasshoppers and then manipulated their colour pattern by painting them striped, black or grey. Next, I released them and estimated and compared survival based on recapture histories. Such studies yield information indicative of natural selection on colour pattern in the wild. However, they are very cumbersome and time consuming. To carry out such manipulative mark-recapture experiments in different habitat types with sufficient levels of replication simply would not be feasible. 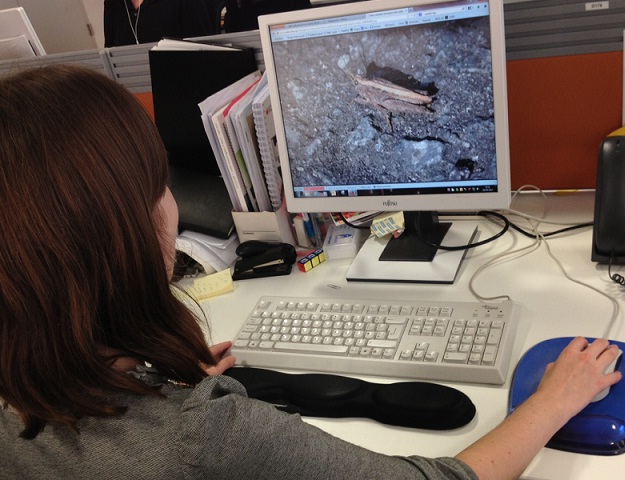 Another important aspect is that by using humans as predators one can be certain that the results do indeed reflect how difficult different types of prey are to detect. In some cases, prey individuals may not be attacked simply because they are not detected by the predator. However, it is also possible that predators detect the prey but mistake it for an inedible object. For instance, the striped pygmy grasshopper morph resembles very closely, at least to the human eye, a dry spruce needle.

At the end of the day, there is no single ideal approach. I guess it’s all about choosing a method that is best suited for answering your specific research question(s). In most cases, it’s necessary to combine different techniques and approaches to obtain a better and more complete understanding.

4.    How comparable is the human visual system to those of these natural predators, and is it valid to use humans to investigate this?

Their small size renders grasshoppers susceptible to visual predators such as birds and lizards. Spiders and other invertebrates may also be an important, but they probably do not select their prey on the basis of colour pattern. In contrast to humans, some insectivorous predators, such as birds, are sensitive to ultraviolet (UV) light. However, Tetrix grasshoppers do not seem to reflect in the UV spectrum, and it is therefore reasonable to assume that there exists an overlap between how humans and natural predators perceive their colour patterns. Humans and natural predators also share similar information processing capabilities. However, before our study no attempt had been made to thoroughly evaluate whether rates of detection by humans can reliably predict and explain patterns of selection and evolutionary modifications of camouflaged prey colour patterns in nature.

This is very encouraging because it means that we can continue using this approach to address other interesting questions in our future research.

5.    In your field studies, the grasshoppers were caught by hand – is this likely to introduce any biases into your findings?

Pygmy grasshoppers predominantly move around on the ground surface and rarely climb vegetation. This makes them difficult to capture with a bag net, and we therefore acted like visual predators and captured individuals that we could see. We know from previous studies based on analyses of capture-mark-recapture data that striped individuals are more difficult to detect and capture than black or grey individuals in burned environments. As a consequence, we may have underestimated the incidence of the striped morph in our samples from populations in this type of environment. However, such a bias would have a conservative influence on our results, making it more difficult to detect an association between detectability and relative morph frequencies in the wild.

6.    Who did your recruit to act as these “human predators”, and what did they make of the experiment?

We used friends, colleagues and students at Linnaeus University that were kind enough to volunteer as predators in these experiments. These 27 men and 27 women ranged in age from 17 to 63 years. All had normal or corrected to normal vision, and they were not colour blind. Generally, they were excited, eager to perform the best they could. Some found the task very difficult and others found it easy – largely depending on which treatment they had been assigned to. Afterwards, most participants thought it was a really cool experiment and they were all curious to know whether they had found more grasshoppers than their friends.

7.    Have there been other studies that have used humans as experimental “predators”? What did they find?

To use humans as ‘predators’ in detection tasks is an increasingly used approach to study function and evolution of protective coloration in animals. At the time when we performed our experiment, there were nearly 40 published studies that had used human predators to investigate issues concerning perception, camouflage, warning coloration and mimicry. The findings of these investigations are too diverse and plentiful to summarize here.

8.    Where will the results of this work take you next?

I and my co-authors Dr. Einat Karpestam and associate professor Sami Merilaita have planned a series of future experiments that build upon this approach and our previous findings. For example, female pygmy grasshoppers are larger than males, and there are differences in body size and morph frequencies among colour morphs within each sex. It would be interesting to examine whether selection by visual predation can help explain these patterns.

The computer game approach with human predators also offers a tool to answer the classical question whether polymorphism offers protection by reducing the search performance of visual predators. There are lots of possibilities and each study generates new interesting questions. It will be exciting to see what findings and insights lays around the corner.

More on the author:

Anders Forsman initiated his research career as a PhD student at Department of Animal Ecology, Uppsala University, where he first began studying predator-prey interactions and local adaptation using insular populations of field voles and common adders as a model system. Whilst working on the zigzag patterned and melanistic adders in the Stockholm archipelago, he became interested in the maintenance of polymorphisms. His fascination for functional aspects of animal colour patterns deepened when he moved to University of Sydney as a postdoctoral researcher in Rick Shine’s lab. In 1994, he returned to Sweden as an assistant professor at Uppsala University and initiated a – still ongoing – research project on causes and consequences of colour polymorphism in pygmy grasshoppers. In 1998 he left Uppsala and moved to Växjö University as a lecturer and associate professor. He became professor in evolutionary ecology in 2002, and is currently at Linnaeus University in Kalmar.