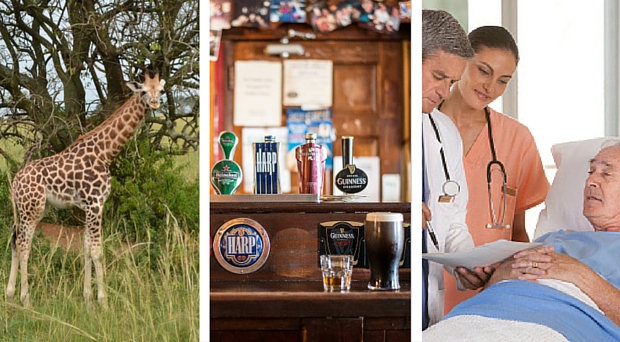 Humming giraffes, alcohol consumption and a quiz on Alzheimer’s, all on the blogs last month

What noise does a giraffe make?

When heading out for a day trip to the zoo, a giraffe might not be the first animal you would expect to hear. But research published in BMC Research Notes provides the best evidence yet that giraffes do communicate, and it’s by humming. Christopher Foote provided an excellent summary of the research, including audio recordings of the giraffe’s themselves, and what this means for the evolution of their social structure.

If you drink more than the recommended number of alcohol units per week, are you more likely to have poorer self-rated health? Not according to research published in BMC Public Health. Co-author Martin Frisher explained how their findings report that those who drink more alcohol are more likely to have better self-rated health. The wealth of the individuals was also likely to affect this. Read the blog to find out more.

September marks World Alzheimer’s Month, aiming to raise awareness and challenge stigmatization and misinformation surrounding the disease. In recognition of this, we put together a quiz asking if you know your fact from fiction on this increasingly common disease. In addition, Executive Director of Alzheimer’s Disease International blogged about improving the quality of life of those with dementia and their families, and Brendan McCormack told us how healthcare has changed for those with the disease.

From defining sepsis to walking after paralysis

What is sepsis? Sepsis Awareness Month took place in September so to honor this, Editor-in-Chief of Journal of Intensive Care explained more about the syndrome, including how we can improve our understanding and try to help those that suffer with the syndrome in the future.

What impact has recent inbreeding had on the genetic diversity of domestic dogs? Tom Lewis from the Kennel Club blogged about his recent research published in Canine Genetics and Epidemiology, investigating the rate of inbreeding in domestic dog breeds.

Genome Biology enters the third dimension: Chromosomes are linear arrays of genes, but how do they arrange themselves in the space of the nucleus? Recent technological advances have led to increased knowledge and Andrew Cosgrove revealed more about what we know now.

The oldest and the scariest sea scorpion: a giant discovery: Dave Marshall described the discovery of a new giant sea scorpion in this blog. Including an audio interview with the authors, find out what this unearthing means for the evolution of the species.

Hepatitis and the Sustainable Development Goals: time for an end run: The governments of the world have committed to ending HIV, but merely combatting viral hepatitis. Jeffrey Lazarus talked about the need for a global goal of eliminating viral hepatitis.

Peer Review Week: The final week of September saw the start of the first ever Peer Review Week and we posted about our new Research Integrity and Peer Review journal, transferable peer review and how the peer review model affects the quality of the report. We also asked who owns peer review? Keep an eye out for more in October.

Think to walk: restoring walking after paraplegia: Paraplegia is the loss of motor or sensory function in the lower extremities, but recent research suggests the possibility of being able to walk again using a brain-computer interface. Co-author of the work revealed more about their findings.