This blog was jointly written by Ben Johnson, Associate Publisher of Flavour Journal here at BioMed Central, and Amye Kenall, our data guru, who spearheads open data initiatives and advocacy. Take time to enjoy this morsel of open data goodness. 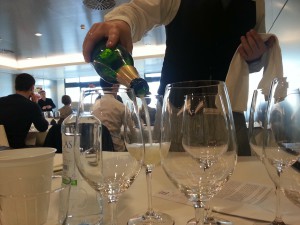 Earlier this week, at a research press conference involving a Champagne tasting for our journal Flavour, I spoke to authors Vanessa Harrar, Barry Smith, Ophelia Deroy, and Charles Spence about their latest article ‘Grape expectations: how the proportion of white grape in Champagne affects the ratings of experts and social drinkers in a blind tasting‘, published last week in the journal.

The study, as do most studies, had collected far more data than was actually represented in the article. It was also very clear the data could be relevant to a much wider audience than researchers in the Food Perception field – certainly other researchers, but also chefs, wine enthusiasts and the general public. Sometimes the full potential of data can only be realised by opening it up not just to researchers from other fields, but to people around the world. With this in mind, the authors of this dataset decided to do just that: make their data open. You can find it on Figshare (https://0-dx-doi-org.brum.beds.ac.uk/10.6084/m9.figshare.865672), a repository that allows anyone to post any research output and share it with the rest of the world.

1. Open data is for big data
‘Open data’ is often connected with ‘Big Data’. But thinking along such lines misses the point of open data. Big Data holds enormous potential to deliver knowledge in a way that didn’t exist before, yes. But inherent in all data, regardless of size, is the potential for reuse. Sometimes this gets lost when talking about data because we usually talk about data in a way that actually disconnects it from ‘discovery’.

Unlike the ‘story’ that goes along with the article – the sharing of which we would all agree is intrinsic to scientific progress – data is often treated more like a tool a scientist uses to come to the article ‘story’, a tool which is then quickly shoved inside a toolbox hidden from the rest of the world. One danger in treating data like this (i.e. not seeing data as scientific discovery in its own right) is that we are literally producing knowledge and throwing half of it down the toilet.

2. Data is for research scientists and no one else

The beauty of the Web is that it allows us to connect to the rest of the world in ways just not logistically possible before. For some areas of science, this has brought with it the opportunity for harnessing the power of crowdsourcing in solving problems, such as with the 2011 e. Coli outbreak and the Galaxy Zoo Citizen Science Project. It has brought with it the ability for anyone, not just researchers, to create, share, and reuse data. The citizen science projects are some great examples of this. But I’m not just talking about crowdsourcing science ‘games’. 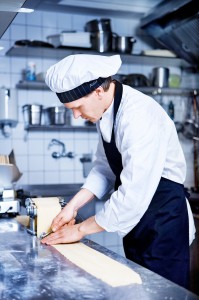 For example (since we’re on the subject of food), some chefs have advocated open data by sharing their recipes and ideas. The Nordic Food Lab, the research arm of Noma, Rene Redzepi’s restaurant in Copenhagen, posts its findings online, as well as publishing research and recipes in open access journals such as Flavour. The lab is also in the early stages of a Wild Edible Plant Database that will allow chefs to find wild plants and cook with them.

Similarly, Ferran Adria has now closed the award-winning El Bulli restaurant in Catalonia to launch a gastronomy think-tank with an ambitious new online resource for chefs, known as Bullipedia. Adria, the chef most closely associated with a scientific approach to cooking, has given no clear remit for the El Bulli Foundation, but has been described as a dining development workshop which will widely and freely sharing their research findings. Intriguingly, a draft name for the foundation was El Bulli Open.

Thinking about it, it can make one laugh: Michelin-starred chefs are sharing their data (recipes, secret ingredients, etc) and yet most of the scientific world still isn’t. Perhaps it’s time to follow their lead?